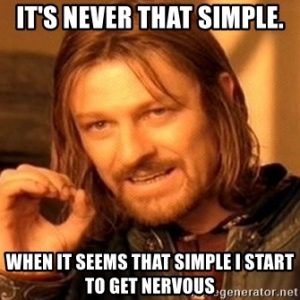 I’m working on the final exam for my introductory biology course which is laced with Darwinism, but also with the philosophy of science, and early on I’d introduced them to Occam’s Razor. I’d tried to explain to them then that while it’s a useful operational tool in designing appropriate experiments, it’s almost never true that the simplest answer is the correct answer, at least not in biology. And then I stumbled across this article on Simplicity in the Philosophy of Science by Simon Fitzpatrick that summed up that same point nicely.

It should be noted, however, that not all scientists agree that simplicity should be regarded as a legitimate criterion for theory choice. The eminent biologist Francis Crick once complained, “[w]hile Occam’s razor is a useful tool in physics, it can be a very dangerous implement in biology. It is thus very rash to use simplicity and elegance as a guide in biological research” (Crick, 1988, p138). Similarly, here are a group of earth scientists writing in Science:

Many scientists accept and apply [Ockham’s Razor] in their work, even though it is an entirely metaphysical assumption. There is scant empirical evidence that the world is actually simple or that simple accounts are more likely than complex ones to be true. Our commitment to simplicity is largely an inheritance of 17th-century theology. (Oreskes et al, 1994, endnote 25)

Oooh, I’ll have to make a note of that for the next time I argue with an Intelligent Design creationist who thinks complexity is a hallmark of design.

Unfortunately, rummaging around in philosophy articles is not a good way to come up with testable questions for a first year biology course, and I still don’t have a good idea on this topic for the exam. I suppose I could just put that quote on a page and ask them to explain why Crick and Oreskes would say such things, but for the sake of my sanity, I’m avoiding asking for long essays from freshman students. I’m sure my students could handle it, but then I’d have to read 50 such essays, and I don’t think I could.

Inconstant weather » « Where is my crocoduck tie?