I’m coming around to Iris‘s point of view. I have a bird feeder just outside my office window. It’s supposed to be squirrel-proof (nothing is squirrel-proof). 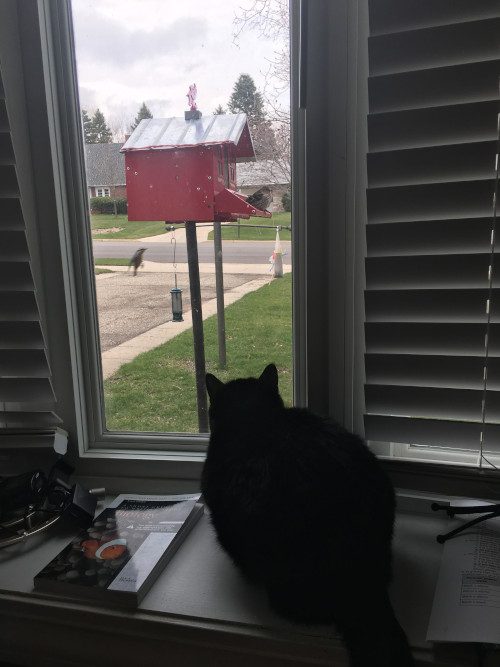 Birds are constantly coming by. Our cat sits there twitching, watching them.

Unfortunately, these big meaty monster squirrels keep climbing up on it, terrifying the birds. There’s a bar for the birds to perch on, to the right, but it’s hinged so that when a heavy rodent climbs on it, it folds down, closing access to the seeds inside. So far, so good.

Only now what the squirrels have figured out is that they can climb onto that silver roof and twist that red handle until it unlatches, and then get on the bar and pop the roof off, allowing them to climb right in and wallow in bird seed. It’s very annoying to find the roof removed and a brushy-tailed rat inside, indulging in gluttony.

I’m trying something different now. I’ve put a line of sriracha sauce all around the roof, and also dabbed it on the latch. We’ll see how well that dissuades the thieves. Otherwise, I wonder if a line of squirrel skulls would work.

Anyone else have other suggestions?

Oh no! A murderbot showed up last night! » « That reminds me…