Yesterday was not a good day. I had way too much on my calendar and worked late, and didn’t get around to my spiders until 5pm…and then, it was a lot of scut work, since their containers were getting filthy with insect corpses, and I had to move everyone to new, clean boxes. Then I discovered that two of my precious males had died! Males really are the weak link. There’d been a wave of moltings throughout the colony, and sometimes they just don’t succeed. I expected one to fail — he was asymmetrical, with one excessively long forelimb, and he’d probably messed up the previous molt — and yeah, sadly, he didn’t make it this time.

Whenever I move them, the spiders all go frantic with activity. The new space is barren, have to put up new webs everywhere! So I threw them each a couple of flies and left them to their business, and this morning they’re all lounging in their silk hammocks, webbing everywhere, and the flies are all trussed up. They are meticulous in their work.

So here’s one I found having a delicious breakfast. I had to stack a few images to get everything in view, so if there’s some blurriness, it’s because she was practically vibrating with happiness (I presume). 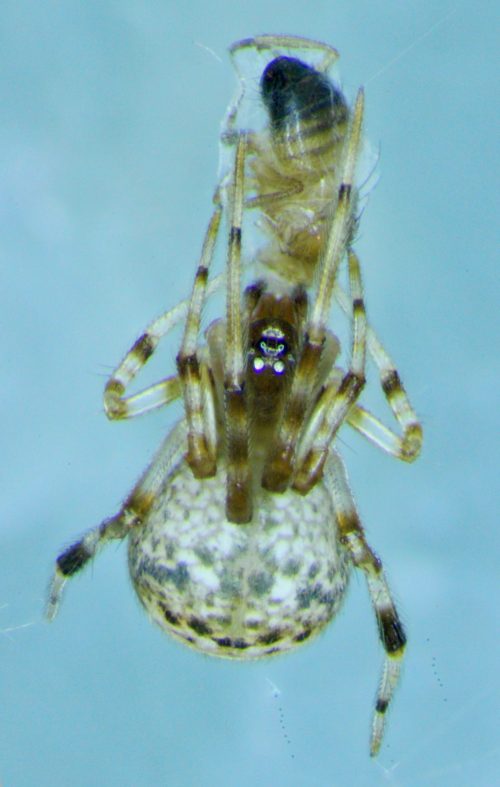 One curious thing I’ve noticed that they almost always go straight for the head in their feeding — this one is jaws-deep in an eyeball. I wonder if fly brains are particularly delicious? Of if maybe they’re just attracted to the color? Or maybe ommatidia are a more fragile point of entry than other parts of the cuticle, so it’s easier to punch in there and slurp out the contents.

Who’s afraid of the big bad Woke Mob? Not me. » « Hector Avalos has died