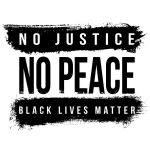 As I’m sure you all know, the trial of the cop who murdered George Floyd is going on in Minneapolis right now. I’ve been watching it out of the side of my eye because the whole thing is ominous. What is worrying me is that Chauvin is indefensible, and his lawyers are floundering, and the prosecutors are firing on all cylinders. Everything appearing in the conventional media is uncompromising.

The witnesses are so damned effective. They brought in a series of teenagers who witnessed the killing and the casual disregard of the cops for the life of that black victim. It’s horrifying testimony.

“It’s been nights I stayed up apologizing and apologized to George Floyd for not doing more,” she added. “And not physically interacting.”

Shortly before she was dismissed from the stand, Frazier added that she tries not to blame herself or the other bystanders for what happened to Floyd.

The defense line is that Chauvin was “distracted” by a violent mob and that it’s the fault of the witnesses that he didn’t release pressure on Floyd’s neck, and tried to portray them as a milling gang of thugs threatening the police.

You may think that it’s a good thing, that Chauvin is going down, that justice will be done.

Let me remind you of the usual fate of cops arrested for murder.

In the United States between 2005 and 2020, of the 42 nonfederal police officers convicted following their arrest for murder due to an on-duty shooting, only five ended up being convicted of murder. The most common offense these officers were convicted of was the lesser charge of manslaughter, with 11 convictions.

I see this as a crap shoot. The end result is going to hinge on the decision of a jury that has spent a lifetime soaking in the rancid broth of white supremacy and implicit racism, and is going to be, in many cases, trying to find excuses for Chauvin, and will be looking longingly at convicting him for lesser charges. The more powerful the prosecution, the stronger the public reaction if he gets nothing but a slap on the wrist.

I’m afraid that if Chauvin is not convicted of murder, Minneapolis is going to erupt in righteous outrage (this is not an argument that he should be convicted to satisfy the public). There will be demonstrations all over the place. Freeways will be blocked by protesters. I will join in the protests. Remember: no justice, no peace.

Could you be a little less obvious in your hints, Death? » « The mantle has passed