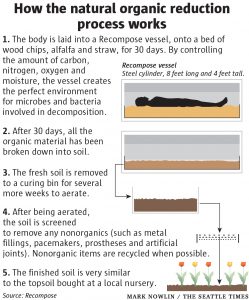 I mentioned before that there is a company that has a “natural organic reduction” process that allows them to compost dead bodies. That’s great! Sign me up! Also, curiously, the company is based in Kent, Washington, the town where I grew up — they have a discreet warehouse in downtown Kent with 10 vessels for processing corpses.

Now I grew up in Kent. However, my parents moved to Auburn, Washington while I was away for my first year of college (they thought they were so clever, but I had a quarter of a bachelor’s degree and was so smart that I managed to track them down). My mother still lives in Auburn, as do several of my brothers and sisters, so it’s kind of a second hometown to me.

Which makes it a little weird that a second, larger composting facility has opened in Auburn.

What happens next is analogous with composting. In this case, the mix and the body reach a temperature just south of 140 degrees, which is almost cooking heat. The process is aerobic, meaning oxygen flows continuously in and out of the vessel. It takes the microbes in the body and puts them on hyper-drive, making them work incredibly fast. Typically, it takes many years to get that done, leaving behind soil.

“It’s what nature meant us to do. We just do it faster,” Truman said.

Carefully-trained technicians monitor the process. An air-filtration system informally called “The Octopus,” which is attached to all 72 pods, carries the odors to a machine where they are treated.

Within a month, the body is gone, leaving only the bones, which workers reduce and then return to the soil in the pod.

Wait, a key part of the system is called “The Octopus”? Is fate sending me a message, calling me home? But I’m not ready yet!

This could be me, in the distant future, I hope. 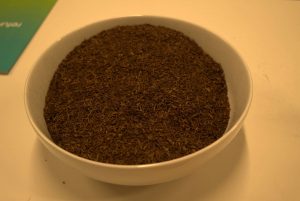