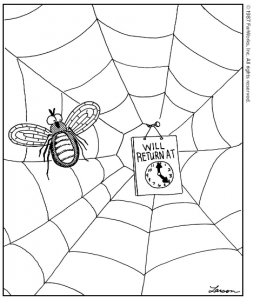 This has been a stressful year, and I haven’t been giving the spiders the time they deserve. So I’ve recently resolved to spend an hour a day in the lab, even if all my other work is screaming at me, just tending to the basics. It’s soothing, I think, and it’ll make the spiders happy, which is what counts.

I have to go in to the university every morning anyway, to open up the fly lab and check on the status of student experiments, and now instead of rushing back to prepare for a lecture or do some grading, I have a zen-like period of contemplation in which I, for instance, feed the spiders, or wash dirty spider cages, or throw out old accumulated debris. I still have some plumbing and aquarium supplies that I’m moving out to our departmental dumpster a bit at a time. Anyone want a bucket of sand? An aquarium pump and filter? I’m putting those all behind me.

This morning I fed the babies; I’m trying out a daily feeding regimen, rather than twice a week, to see if can get them to grow a little faster. I’ve also moved some of the up-and-coming generation from the 130ml plastic cubes to 5.7l adult cages, to see if the expanded space promotes expanded growth. They look so tiny and lost in there! But they are cobwebbing them up well enough. I just hope that the flies aren’t getting lost in all that volume.

I’m also working at spiffing up the lab a bit, picking a stretch of bench every morning, cleaning it up and scrubbing it down, and just generally making it all shiny and tidy. I’ve been neglecting my patrons at my patreon account, and on my list of things to do is, in addition to more spiders as they emerge this spring, a video tour of my spider lab, maybe in the next two weeks (next weekend is hellish with grading, but maybe the weekend after that). This will initially be a patron-only video, but maybe I’ll make it public the month after. Sign up if you want to see the premiere! All the money donated every month goes to pay off our legal debt! I look forward to clearing that debt in the next few years so I can sink the money into the lab instead.

What? A spider…outside? » « My “WTF” moment of the morning