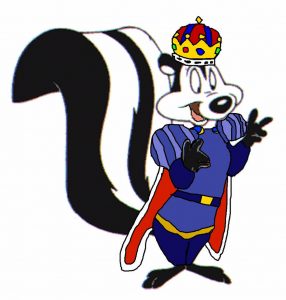 I’ve been struggling to come up with a good excuse for keeping the British monarchy around, and I’ve come up with two. Just two.

These are all worthy accomplishments, but also rather superfluous. Irish writers have a long history of beautiful writing and hardly need a royal cause to motivate them; for that matter, the Scots and Welsh have also achieved much in spite of the English appendage to their homelands. While I’m happy to see Piers Morgan blow himself up, conservatives will seek out and detonate outrage no matter where it comes from. If they aren’t rushing to support the British Royal family, they’ll just latch on to some other victim, like Pepe LePew.

Come to think of it, a British royal and an entitled, oblivious cartoon skunk do have much in common.

Bring back the weird » « FORNICATION!