The paleontological literature is a showcase for tragedy — it’s a graveyard of long-dead species, all snuffed out millions and millions of years before any human was around to appreciate them, and all we can do is look in awe at their fossilized corpses. In particular, fans of the Cambrian fauna can only pine for magnificently weird creatures that have been extinct for hundreds of millions of years, and represent entire exotic lineages that have left no descendants today. Two of the strangest are Anomalocaris and Opabinia.

Two of the most peculiar Burgess Shale animals, Anomalocaris and Opabinia, illustrate the complicated history of research of many Cambrian soft-bodied taxa – a result of their unfamiliar morphologies compared to the occupants of modern oceans. Both Anomalocaris and Opabinia possess compound eyes, lateral swimming flaps, filamentous setal structures, and a tail fan. Recent work has revealed that Anomalocaris and its relatives, the radiodonts, are united by the presence of paired sclerotized protocerebral frontal appendages and mouthparts composed of plates of multiple sizes, forming a diverse group containing over 20 taxa. Radiodonts range in age from the early Cambrian to at least the Devonian, and have been recovered from numerous palaeocontinents. Meanwhile, the most celebrated animal from the Burgess Shale, Opabinia regalis, with its head bearing five stalked eyes and a proboscis, remains the only opabiniid species confidently identified and is only known from a single quarry in the Burgess Shale. Myoscolex ateles from the Emu Bay Shale was proposed as a possible close relative, though this interpretation was hotly contested, and other authors have proposed a polychaete affinity.

The radiodonts (arthropods with mouths containing plates arranged in a wheel, that irised open and closed) are diverse and notorious. For a time, they were the largest predators on the planet, with their paired long spiky Great Appendages extending from the front of their head. Like the quote says, the opabiniiids are known from one location and one species, but they are weird. A similar array of swimming flaps like Anomalocaris, but then having 5 eyes on stalks and a long snout with a mouth on the end of it…it’s heartbreaking that they no longer exist. Spiders are cool and all, but I’d love to have schools of anomalocariids or opabiniids swarming in our local lakes.

At least one new opabiniid species has been identified, though. This cutie: 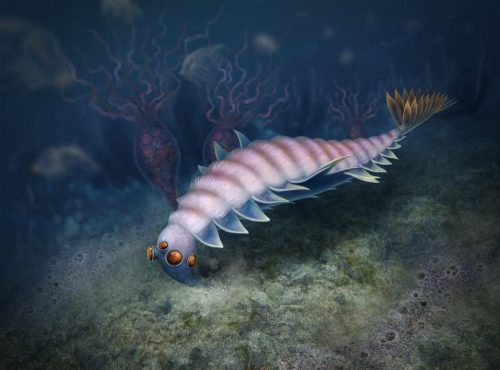 For perspective, here’s where they fall on the phylogenetic tree. 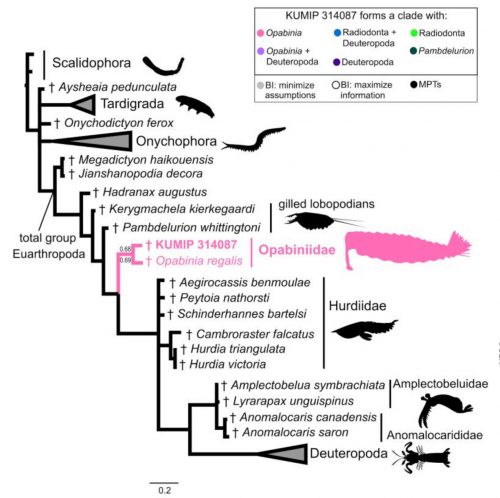 Tardigrades and velvet worms and mantis shrimp are certainly wonderful and interesting animals, but I have to yearn to see more of that glorious radiation of interesting forms in between. All gone, though. If gods were real, they’d never have let them die off.