Let’s get my usual negativity out of the way: I don’t think humans will ever be capable of sustained living in space. We’re too fragile and to highly adapted to those little things, like, oh, gravity and air pressure and specific proportions of oxygen and CO2. Short term, maybe, but I see the toll it takes on astronauts living in orbit for a few months, and I have to wonder why we’re even trying to build space stations. Elon Musk is never going to colonize Mars, he’s just recruiting victims for the most expensive death trap ever.

Here’s what I do like, though: robots. More robots! Robots can be designed to function in all those environments that we’d be nuts to try and live in. NASA has been fantastic at building robots, and space robots really ought to be what NASA does.

So hooray for Perseverance! 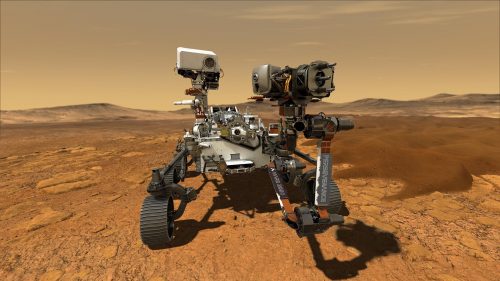 I also appreciate that they’re using this robot to search for evidence of ancient life on Mars.

Scientists believe that, around 3.5 billion years ago the Jezero crater – where Perseverance was sent – was home to a river that flowed into a lake and deposited sediment in a fan-shaped delta. They hoped it could harbour fossilised microorganisms the rover could find evidence of.

However, before the landing, there were some nerves about Jezero crater as a destination. Mr Chen said: “It’s full of the stuff that scientists want to see but stuff that I don’t want to land on.”

I’m a little disappointed that, near as I can tell, they’re relying on visual analysis with a suite of fancy cameras — you’re not going to find out much about bacteria with that. They’re caching the samples and are going to have another lander fetch and return with them? I want to see that.

Of course, if they find the Martian version of a trilobite, I guess high-quality images will be enough (they won’t, but it would be cool.)

Grrrr, goddamned atheists » « I might be tempted to vote for a Republican who wore one of these