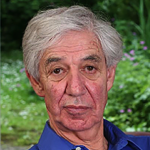 This is sad — Wolpert was one of my favorite developmental biologists. Years ago I wrestled with my choice of developmental textbook, between Scott Gilbert’s Developmental Biology, which is very very good, and Wolpert’s Principles of Development, which I eventually decided was a better fit to how I taught the course. I also appreciated his work on positional information and patterning. And now he has died at the age of 91, and only now do I find out that he lived an interesting life.

He studied civil engineering at the University of the Witwatersrand, where he became involved in progressive politics, helping to distribute communist literature in the townships; in 1952 he met Nelson Mandela. After two years working on soil mechanics as assistant to the director of the Building Research Institute in Pretoria, he hitchhiked to Europe, working briefly for the water planning board in Israel before studying soil mechanics at Imperial College London.

His life was changed when a friend in South Africa wrote to suggest he apply his knowledge of mechanics to the study of dividing cells. The biophysicist James Danielli at King’s College London accepted him as a PhD student, and with a Swedish colleague, Trygve Gustafson, he went on to measure the mechanical forces involved in cell division. He was promoted to lecturer and reader (in zoology) at King’s before taking up the chair of biology as applied to medicine at the Middlesex (transferred to University College London after the two institutions merged), where he remained until he retired aged 74.

He was also a great popularizer with a radio show discussing science in the UK, which I’ve had difficulty finding here — he does have a debate with William Lane Craig on YouTube, which I’ve avoided ever watching, because I can’t stand that sanctimonious Christian liar. Wolpert also has some things I disagree with, such as his gender essentialist leanings, a common problem with older developmental biologists steeped in model systems and lacking exposure to population thinking.

It wasn’t all an upward ascent for him. He suffered from a crippling depression.

The marriage to Elizabeth ended in divorce, and in 1993 Wolpert married the Australian writer Jill Neville. It was when his working and home lives were at their most secure and harmonious that a suicidal episode led to him spending three weeks in hospital. He recovered after treatment with antidepressants and cognitive behavioural therapy. Jill died suddenly of cancer in 1997.

Lately I’ve come to appreciate how devastating depression can be. And cancer sucks.

Shut up, Jordan Peterson » « Do the COVIDiots even understand actuarial statistics?