Because I find this rather convincing that COVID-19 is much more than “just a flu”. 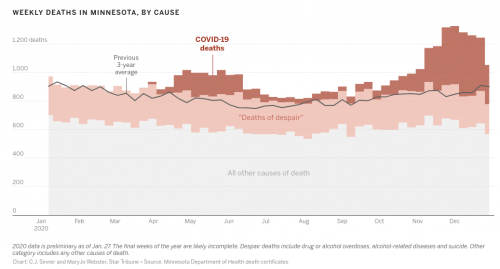 The Minnesota numbers are in, and they don’t look good.

Minnesota suffered more than 50,000 deaths in a year for the first time in recorded state history in 2020, mostly because of COVID-19 but also due to rising drug abuse and worsening racial health disparities.

A 15% increase in mortality from 2019 to 2020 demonstrates that the pandemic actually caused more deaths in Minnesota and wasn’t just a substitute cause for people who were likely to die anyway.

Hey, can we simplify that and just call all the deaths due to the neglected pandemic response, the erosion of our social safety net, and racism the Republican death toll?

Lewis Wolpert has died » « Could MegaFarmCorps do good for the land?