As we’ve mentioned a few times, we’re having another casual fundraiser this month, and as part of that, we’re doing another fictional story chain. Last time, I got stuck with the chore of providing the concluding chapter of A Dark Web, which involved wrapping up a complicated storyline with gory violent murder and hybrid human-spiders. This time around, I get revenge by starting the thread with a complicated science fiction story about transhumans living on a partially terraformed Mars, and now I get to watch everyone else try to steer the story in unexpected directions (next up: Iris, followed by Abe) and William Brinkman gets to bat clean-up. We’ll have to try a different order in future story threads.

Jump below the fold and get started! Don’t worry, there are far fewer spiders in this one, so far. 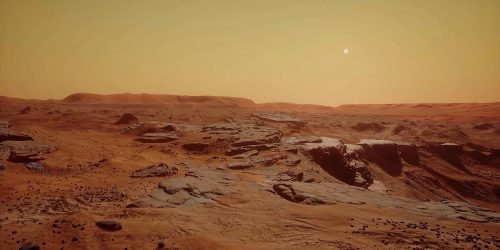 Part 2 of the story is on Death to Squirrels!

Key loped across the Martian highlands, occasionally bounding over drifts of snow. They had been summoned to the Wei crater farmhold, at the request of the Spaceborn, and they needed to hurry to beat the sunset and the abrupt temperature drop when darkness fell. They scanned the horizon, adjusting their goggles to maximum magnification, and saw sudden movement; a herd of orthopterid grazers had moved into a defensive circle, their spiny hindlimbs facing outward, as a pack of snow spiders had picked off one of the juveniles and were ravaging their prey. No danger, though, they were far enough away and busy with their dinner, and Key would be over the horizon before they would notice him.

Infalling ice meteors streaked the purple sky. Martians had an obligation to assist the Spaceborn, who sustained the terraforming efforts to benefit the Marsborn…and themselves. Since Earth had retreated into isolation, horrified at what their children had become, Mars was the sole source of complex organics for the teeming billions now populating the asteroid belt and the moons of the outer planets. Key was a liaison between the scattered farmholds of Mars and the trading station at Wei, and ranged frequently across the wilderness, bringing diplomatic contact to the diverse population centers and the orbiting stations of the Spaceborn, who’d become so strongly adapted to their artificial, zero G habitats that most could not bear to visit even the weak gravity of Mars.

Jimin was Key’s counterpart among the Spaceborn – they were robust enough to cope with brief visits to the surface. Jimin reveled in their strength, flaunting their etiolated body with their 3 pairs of limbs, their contortionist’s flexibility, the flamboyant phosphorescent tattoos of the born spacer, wearing only a utility harness, proud of their transhuman status. Key was enchanted at their first meeting. They had a Martian modesty and practicality, wearing heavy insulating clothing over their stocky broad-chested body and stilt-like legs, and Jimin seemed like a complementary match. They became close friends, Jimin bearing the discomfort of 0.4 G visits more frequently than was probably necessary to do their job, and Key was often brought into orbit for a week at a time, to meet with other spacebound Spaceborn for discussions about the planet. Being called back to visit Wei was a pleasure.

As Key crossed the rim of the crater, the surface installations and agricultural domes of the station came into view, as did the squat cargo shuttle on its pad. With happy anticipation, they bounded into an airlock and took the elevator down to the habitation level. The slightly thicker atmosphere maintained in the habitat was welcome, as was the warmth – 5 degrees C felt cozy to a Martian – and Key relaxed and loosened their burnous and unsnapped their mask.

Key was greeted by a clerk. “Welcome back, Ranger Key! The Spaceborn delegation is waiting for you, and they are eager to get back off-planet!”

They were ushered into a meeting room, where to Key’s surprise, Jimin was not present. Instead, there were two miserable-looking Spaceborn, their limbs braced with motorized prosthetics, slumped into wheelchairs.

“Ranger Key, greetings. I am Han* Afia, and my assistant here is Sha Ditya. We have traveled here to seek your assistance. Your urgent assistance.”

“I am at your service. What can I do for the Spaceborn?”

“We have bit off more than we can chew. Ditya and I, with overconfident arrogance, assumed that we’d be able to cope with a planetside mission if we had a little robotic assistance…”

Ditya lifted her arm a few centimeters, and gestured at her prosthetics. “We thought this would be adequate. We did not realize the debilitating effects of this damnable “weight”. Our respect for the Martian peoples is increased.”

“Yes,” said Afia. “We thought we could just land, roll into our ground transport, and drive 500 clicks to the polar research station. Instead, we lie here, our spines cracking, our guts bleeding, and we just want to get into a gel couch and back into orbit.”

“I don’t understand. Why? Even Jimin would have found this difficult, and they are better acclimated to Mars than any Spaceborn I’ve ever met. They would have advised against such a foolish effort.”

“The thing is,” said Afia, “that’s why we tried. Jimin is missing. We need you to find them.”

After a moment’s stunned surprise, Key asked, “What? How?”

“We have news that must not go beyond this room. Two months ago, Earth launched a probe to Mars. We think it was crewed. It’s purpose is unknown, and the Earthborn have made no announcements.”

Now Key was even more shocked. Earth had withdrawn from space centuries ago, declaring colonization a failure, and hidden behind a violent silence, destroying every Spaceborn satellite and probe. The only way to colonize the hostile environments outside their homeworld had been radical genetic modification to modify biochemistry, physiology, and morphology. To the Spaceborn, these changes were a success, and they had flourished and populated the outer reaches of the solar system. To the Earthborn, they were no longer human and space travel represented a speciation event that filled the solar system with hideous, uncanny aliens.

Even Mars, where terraforming had brought a world to some similarity with Earth, was a catastrophe. Where they’d expected to create a green world with familiar people and fields of grain and flocks of sheep, instead they got big-eyed aliens with stick-like limbs and cuticles thick and glossy black, while the landscape was arid and scrubby, and rather than comfortable mammals, had been instead a paradise for arthropods that thrived and grew much larger than they ever could on Earth.

Worse, in many ways, extraterrestrials had diversified culturally. Tiny, isolated, and self-sufficient enclaves separated by hundreds of thousands or millions of kilometers had allowed for even more radical social experimentation. The aliens could not invade Earth physically – they wouldn’t even be able to stand up in the fierce gravity – but they had ideas, wild weird infectious ideas, and the conservative peoples of Earth slammed the door shut in revulsion, and wrote off everything outside their atmosphere. They denied their children and left the Spaceborn and Marsborn bereft.

“A week ago, the probe landed at the polar research station. The station immediately went silent,” said Ditya.
“We sent Jimin to investigate. We’ve heard nothing from them since,” said Afia. “We need you to go North in our transport, in the depths of a hostile Martian winter, through terrain populated with bandits, isolated farmsteads, and giant bugs, to find out why these Earthborn had come to Mars, and what they want. Are you willing?”