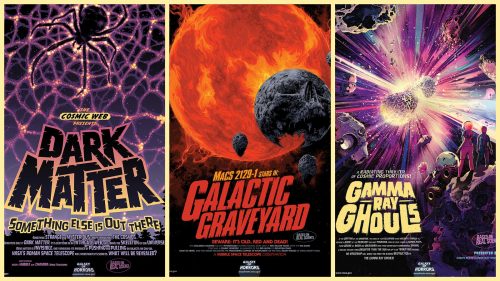 Astronomy Picture of the Day

This is the conclusion of our story chain, A Dark Web. You can find the previous chapters here:

Warning: this chapter is a bit heavy on the exposition, and includes a little bit of gore and violence. Maybe a bit of body horror, too, if you’re uncomfortable with the idea of spider/human chimeras.

Everyone looked up at spiders nesting on the roof of the tunnel. Connie felt a wetness splash across her eyes and reached up to wipe it away, when she saw Kyle and Mateo drop with a thud to the floor, and Katie struggling to open her medical bag before she too collapsed. Connie and Billy looked at each other, when they heard a phlegmy chuckle from the shadows.

“Connie! Good to see you again, after all these years! And Billy! You always were a pain in the butt, you should be dead by now. Well, we can do something about that.”

“Who are you,” asked Connie, “and what have you done to my friends?”

“You don’t recognize me? I’m hurt.” A stooped form stepped into the light, cloaked and limping. It threw back its hood to reveal a hideous face with a flat, sloping skull, bristling with thick black hairs, and most disturbingly, with eight hemispherical black eyes glistening. “Perhaps my name will help. Kurt? The lab assistant who gave you those delightful injections a score of years ago?”

Connie took a step back. “I…yes. The years haven’t been good to you, I see.”

“You are wrong. They’ve been very good. You and Billy fled before the cycle of treatments were completed, and received only fragmentary benefit, while I have been and am in the process of becoming. My first gift was the paralytic venom that has incapacitated your colleagues, but I have acquired so much more. My vision is much more sensitive and acute, and there have been other…changes.” He held up his left hand so the sleeve of the robe slipped down, revealing a horrifyingly bifurcated armored limb ending in two clawed hands. “Now! Bring the prisoners!” he commanded more shadows, “And perhaps we can complete your metamorphosis, Connie.”

Huge spiders a half meter long suddenly flocked into the tunnel to begin wrapping the unconscious people in silk; a pair climbed up Billy and Connie, wrapped their wrists in strands of silk, cinched them tight, and then leapt down and brought silk leashes to Kurt’s claws. He led them away.

“What are you going to do with our friends?” Billy asked.

“Oh, you know. Don’t play stupid. The same thing we’ve done to all of our prey, in the years gone by. You’ve tried to disrupt our operations often enough! They will be injected with yummy poisons and enzymes, allowed to ripen for a few days, and then their precious fluids drained and sold to gullible fools who favor their hallucinogenic properties, unaware that their metabolisms are being prepared for a grander scheme. Heh heh heh.”

They emerged from the tunnel into a larger, dimly lit room. Hanging from the ceiling all around were human forms, encased in silk. None were moving. Large spiders moved over them, occasionally nipping the bodies with needle-fanged chelicerae.

Connie, horrified, said, “This is an atrocity. You and the professor started out with the wonderful goal of trying to help people with genetic diseases, and now this – murdering people, drug dealing, and turning yourselves into warped creatures. Now it’s all … mad science and spider monsters!”

“Do not speak of him! You abandoned him, you betrayed him, and ever since you’ve been interfering in his great work!” Kurt whipped around and thrust his face up into Connie’s. Foaming spittle dripped from his mouth, reeking of corruption. “He continues the work, far away, in a place where your Company will not find him!”

“’Great work’,” Connie sneered. “You look like a deformed evil muppet, and your wonderful talent is breath like a corpse. You kiss your mother with that mouth?”

Kurt hissed and threw her to floor. Billy knelt down beside her and whispered, “Cool it, don’t piss off the spider monster.”

She whispered back, “We need to get him to tell us more.” She yelled, “Hey, Kurt! Still the lackey doing menial chores for your betters? And still angry about it?”

“We serve a greater species, a far advanced alien race, and they promise to make us one with them! There is no greater purpose than advancing humanity!”

“Right. You want to make us one with spider monsters.”

“They are NOT spider monsters! They are beautiful, noble beings that simply first made contact with spiders in the super-collider. Spiders are the bridge between Homo sapiens and these graceful, hyper-intelligent representatives of the next stage in our evolution!” raged Kurt.

“I don’t see anything beautiful in what you are doing, Kurt.”

He howled, “They rest in the void between the stars, waiting for new species to contact them! They are peaceful. They only gave us information, the tools we need to transform ourselves. You simply cannot comprehend their majesty and power, and want to interfere with our ascension!”

Kurt leaned in close, his expressionless eyes gleaming like obsidian. “You can still join us,” he said, “you are so close, I can tell.”

“You’ve forgotten something,” Connie gently, softly whispered in his ear.

Connie quickly cut the silk bonds holding her wrists together, and her mandibles refolded themselves. “Yuck,” she said, making a face, “I hate doing that. And he tasted bad.”

She freed Billy, and they headed back to the tunnel, where they found a spider swarm hauling the cocooned forms of Mateo, Katie, and Kyle towards them. The spiders were quite willing to be shooed away – they seemed generally complacent in the absence of their master’s commands, and the three were cut free. Fortunately, Katie’s medical bag was wrapped up with her, and a few injections of antivenom later, and the whole team was standing up woozily and staggering through the collection of Gabriel’s Crest villagers.

“What about them?” Kyle asked.

“Too late,” Katie replied. She gave one of the swinging, swaddled bodies a poke. “Their guts have already been liquified.”

“Mateo, now it’s your job,” said Connie. “This place must be supplied with a lot of electrical power, find the source and rig it up with explosives. We need to blow this place up with some major fires to get rid of the evidence. Then we’ll head back up and get away from this dead, doomed place.”

Shortly, the crew was driving away, leaving a flaming conflagration behind them as Gabriel’s Crest burned to the ground. Kyle looked pale and shocked. “No one told me that this is what I was getting into. What next?”

“Next,” answered Connie, “we track down a certain insane professor and end his plan to poison and transform humanity. Eventually we’ll have to wipe out a horde of scheming spider monsters lurking in the deep dark, trying to lure our species to its doom. I hope you are ready for a long haul.”

The End (until next Halloween?)

Please do check out our fundraising page for more on our Halloween event. If you enjoyed any of it, we hope you’ll make a donation to our legal fund!