Anyone remember Ed Conrad? I had a few encounters with him years and years ago. Now I found someone worse, a guy named Roger Spurr who runs a YouTube channel called “Mudfossil University”. It’s about as much a university as PragerU; it’s a dorkwad with stupid ideas promoting them without any critical evaluation, and what he believes is that natural rock formations and caves are actually the fossilized remains of giants. So I had to make a video about him.

Scriptish sort of thing below the fold. 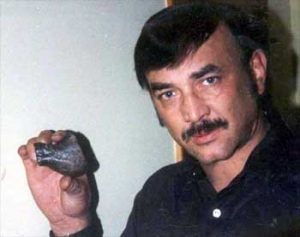 I’d like to tell you a little story about something that happened about 25 years ago. There was this fellow named Ed Conrad who made a bit of a pest of himself on usenet, posting frequent nonsense on the newsgroup talk.origins, claiming that he’d found fossil human remains in the coal fields of central Pennsylvania, which made him a little unusual. He wasn’t a young earth creationist at all; rather, his refrain was that “Man was Old as Coal”, making humanity at least 300 million years old. Of course, the “fossils” he touted were just rocks shaped vaguely like how he thought human bones and other organs were shaped. He was quite proud of this irregular blob in a rock that he thought was a giant skull, comparing it to a real skull. 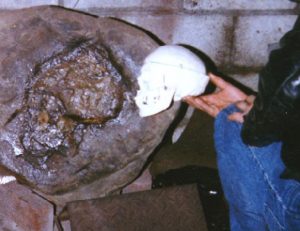 Anyway, I worked a few hours away from him, at Temple University in Philadelphia, and I invited him to stop by my lab with his specimens and we’d take a close look. In particular, I mentioned that bones have a clear, specific internal structure, and that you could see these characteristic profiles, called Haversian systems, or osteons. The centers of hard long bones are basically made of bundled rods, and they’re easy to visualise.

I had slides with bone sections handy, and I told him we could compare them side by side with sections he had of what he called a long bone, a femur. I know, I am so nice!

I also had sections of fossilized dinosaur bone, for an even better comparison. Really, this structure is preserved in fossils that are hundreds of millions of years old!
Ed showed up, we had a pleasant afternoon looking at his odd-shaped rocks – he proudly showed off his fossilized testicle, fossilized gall bladder, and fossilized penis – and we put his sectioned material on the microscope and took photos. Here’s what they looked like.

Sorry to say, they looked nothing like bone. They looked like jumbled, fractured rocky concretions. That day, Ed looked chagrined and disappointed, and admitted that I’d dealt with him fairly and given him a fair shot to test his claims, and that what he had brought failed the test. That day. You’ll have to wait until I finish my second story to find out what he said on the second day.
Now I want to talk about Roger Spurr, of “Mudfossil University”. He’s Ed Conrad’s intellectual inferior, and he has a YouTube channel with 97,000 subscribers. Like Conrad, his gimmick is to wave his hands at anything that looks vaguely similar in shape to something biological, and claim it is a remnant of some antediluvial being. He is so stupid and deluded that it was physically painful to watch one of his idiotic videos. Did I mention the 97 freakin’ thousand subscribers? Really, you all better click on that subscribe button for my channel.

So let’s see a bit of one of his videos.

[Spurr holds up a rock, claims it is a lung]

That’s not a lung. It looks nothing like a human lung. Let me tell you, my cell bio lab is right next to our human anatomy lab, and more than once I’ve gone into our shared prep room and opened a refrigerator to see a pair of lungs, or some other organ, from a human cadaver laid out on top of the crisper drawer. Nope. That’s not a lung. Not even a fossilised lung. It’s a child’s fantasy of what a lung looks like, drawn in crayon.

But then he goes on with more nonsense.

[Spurr points at diagrams of gastrulae, doesn’t know what a blastopore is]

Nope. He’s got it all wrong. That is a diagram of a gastrula , which is roughly spherical, and that gap he’s pointing at becomes the anus in us vertebrates. Not a ventral seam. He’s not even close on the arrangement of tissues or the topology of the embryo. Yet he says everything with such confidence, when clearly he doesn’t have a lick of education, and has never studied embryology. It reminds me that “con man” is short for “Confidence man”, and that’s what he is.

That’s not an abdominal cavity. You don’t have a “seam” where he claims you do. At least, not one you can trace back to a gap in a gastrula, embryologically.

[Spurr claims thin seams can’t be faked in a rock]

What? No! He’s trying to set you up, claiming it’s impossible to carve a tiny little seam in a rock, so that he can show you a rock with a seam in it as evidence that it wasn’t carved. That’s nonsense. A sculptor can put all kinds of amazing detail in a sculpture.

[Spurr claims all caves are parts of fossil organs]

Apparently, this loon believes that every geological cavity and protuberance is a piece of a deceased giant, instantly and permanently petrified at the instant of death. 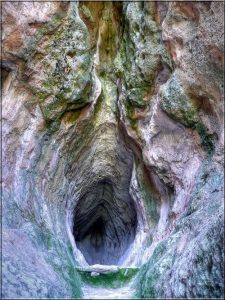 Contrary to his assertion that he knows his way around a vagina, he’s dead wrong: vaginas are typically part of a whole person, are surrounded by muscles and flesh and bones, with limbs nearby and an abdomen above and a complete torso containing complex organs. It is rank absurdity to see an open tube in the landscape and declare it to be a vagina.

What makes this even more absurd is that I looked up this cave. It’s Utroba Cave in Bulgaria, and it was carved by ancient Thracians 3000 years ago to enhance its resemblance to a vagina. It’s got an altar where the cervix would be, and nearby there are niches carved in the rock to hold bottles of wine, the better to encourage appropriate worship of female fertility, features I have not noticed in any woman. This is an artificial structure!

He goes on to claim that rock pillars are erect penises, and he claims to see other organs in rocks. In that way he does remind me of Ed Conrad, who claimed that the clinkers he found in mine tailings were pieces of viscera. I asked him flat out if he imagined that all these remains of people he found were fragments of a catastrophe, a great explosion that sent gibs flying everywhere, with shattered people broken to gooey bits, yet with the pieces retaining enough integrity to still look like kidneys, or brains, or intestines, or genitals, and he insisted that’s exactly what they were. Pennsyltucky is just covered with dismantled people fragments, all turned to stone. He was an idiot, too. Just like Roger Spurr.

I said I’d tell you what Ed Conrad said two days after his visit to my lab, and there’s a lesson there, too. He accused me of swapping out his precious specimens and replacing them with fakes — fakes that looked exactly like his rocks on the outside, but with all the revealing internal structure replaced with garbage. My invitation to visit, and my patience in explaining fine structure to him, were all pretexts to steal and destroy his data that revealed Man As Old As Coal.

That I took the time to explain how his rocks were not fossils had no effect on Ed Conrad. He went on to continue to post his nonsensical, futile screeds on usenet for 20 more years. They were all the same. Nothing but assertions that “MAN AS OLD AS COAL” followed by links to his website, where he had photos of odd-shaped rocks that he claimed were actually bits of human anatomy. He was just a persistent kook who was mostly ignored. Notice that his post had all of 82 views; he clearly needed to get on YouTube, where he would have thrived and gotten 97,000 subscribers.

Ed Conrad seems to have died around 2015, or at least, he abruptly stopped posting anything. I don’t think anyone even noticed for a while — one note of the background noise of usenet dropped out, and that is all.

I suspect that will be Roger Spurr’s fate, too — one day he’ll just drop off the internet, no one will care or mourn, and he definitely won’t have made any impression on the scientific community. Sad to say, that’s the fate of most of us. Don’t look at your subscriber count as validation, it’s the quality of your ideas that matter, and I’m afraid Roger is just a silly old fool drunk on ignorance and arrogance.

Well, that was depressing. If you really want depressing, though, take a look at the YouTube comments on Roger’s videos — there is so much fawning and simpering and praise for fatuous nonsense, and not a bit of criticism. I suspect that Roger rather thoroughly filters all comments, allowing only those that reinforce his fantasy world of working away on science at Mudfossil University. 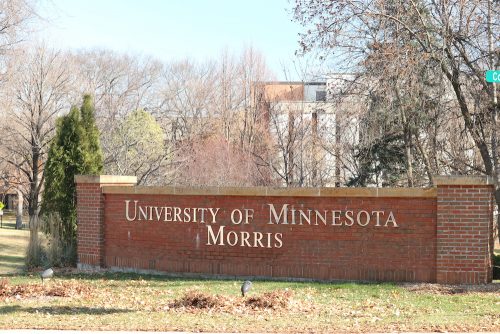 I’ll leave you there with some shots of where I work, a real university, the University of Minnesota Morris, overlaid with a list of my patrons. Can we get that up to 97,000, too?

Stay home. Please. » « It’s probably too late for me to join the girl scouts