Oh, hey, it’s the day before Halloween, and I only just now looked up from my work. This has been a busy day — it’s advising week, and all these students have been lining up at my virtual door to get me to validate their choices for spring term courses. We didn’t have this when I was an undergrad at the UW. Instead, we had a scavenger hunt every quarter: we’d puzzle out on our own what courses we needed, then we’d run around campus, tracking down professors and asking them for a precious computer punchcard, which they’d give us if we met their standards, and then we’d get in a long line and file in to the registrar, turn in our deck of cards which would go into a cardreader, and then 10 minutes (or so) later, we’d get a printout of the courses we were taking (unless there was a conflict or error, in which case we’d get our cards back and go on another scavenger hunt to find a card that fixed everything), and we’d turn around and walk a few meters to the conveniently located billing office to cough up our tuition on the spot.

So that ate up a good part of today. It might have been better in the good old days when the students had to do all the legwork.

We also reviewed our recent spider experiments, which were kind of disappointing. The spiders were mostly immobile in the time-lapse recordings, and we were wondering what we were doing wrong, and then we noticed…”say, how come the illumination in these videos never changes?”…so I checked the timer on our light source, and realized it was broken and it has permanently been 3pm all week long. No wonder I’m so tired! So I ordered new timers.

While we were waiting for that to arrive, we tried a wild-ass sloppy experiment, and just let the lights in the lab regulate the light level for a few days in our time-lapse rig. We discovered that lab lighting is temporal chaos, with custodians and security guards doing their thing, so that there is no such thing as a 14:10 light cycle. There’s supposed to be a pattern! The cage goes purplish pink when the IR camera is working, and shades of gray when we’ve got daylight, but no: they’ve been on an 8:2:3:1:7:3 cycle, I think, and who knows what’s going on. The spiders probably don’t.

We did notice that our reclusive spiders did go into overdrive in the brief periods of real darkness, though, so now we just have to get that functioning reliably.

So the new timers arrived today, and Ade built a Space Cocoon. 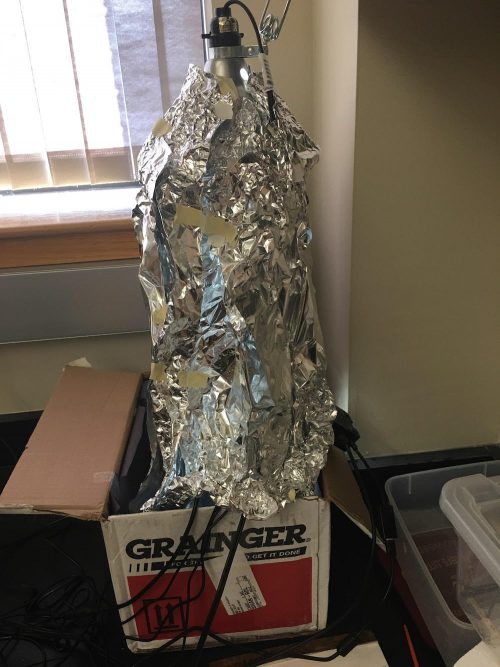 What that is is, on top, a clamp light with a natural daylight lamp on a functioning timer with a 14 hour on/10 hour off cycle. Below that is a Raspberry PI with a NoIR camera, and also an IR lamp that is permanently on. Below that is a cage with a spider in it, trapped in a kind of panopticon. And then, elegantly wrapped around the whole contraption, a couple of layers of aluminum foil so the only thing illuminating the spider’s living quarters is our controlled lighting. It ain’t pretty, but we’ll try to get some data and then fuss over making it fancy.

Then I fed the babies.

I’m getting pretty slick at that. Here’s the way I work it: 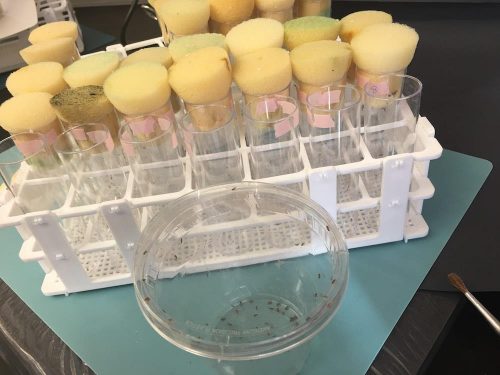 I put a few hundred fruit flies in the wide mouth plastic cup in the foreground, with a petri dish as a lid to prevent them from escaping. Then I remove the foam plugs from a row of spider vials, tap tap tap to knock all the flies to the bottom of the cup, remove the petri dish, and incline the cup so one side is almost horizontal over the vials. The flies (wingless, so they have to walk) rush to the lip of the cup, where I’m waiting with a paintbrush to flick, flick, flick flies into the hellmouths of the vials, where they are instantly trapped in the dense mat of silk therein. Cap the cup, restore the foam plugs, and repeat. I can do 300 baby spiders in 15 minutes now. 1200 spiders per hour. I could raise an army of about 10,000 spiders if I didn’t have to do that pesky teaching and committee work stuff. DOES NO ONE UNDERSTAND MY PRIORITIES?

That was my Friday.

You know, if I could kidnap the students I advise and put them to work in my spider farm, I’d be able to raise hundreds of thousands of spiders. I’d have to take over some adjacent labs to accomplish that, but if I must, I must. We demand Spinnenraum, it is our destiny!

Happy Halloween! Check out our schedule! » « I’m in a Lio cartoon!