It must be awfully easy to get published in the Journal of the British Interplanetary Society. A couple of beers, some scratches on a cocktail napkin, and you get to call it research.

According to a research paper accepted for publication in the Journal of the British Interplanetary Society, extraterrestrials are sleeping while they wait. In the paper, authors from Oxford’s Future of Humanity Institute and the Astronomical Observatory of Belgrade Anders Sandberg, Stuart Armstrong, and Milan Cirkovic argue that the universe is too hot right now for advanced, digital civilizations to make the most efficient use of their resources. The solution: Sleep and wait for the universe to cool down, a process known as aestivating (like hibernation but sleeping until it’s colder).

Understanding the new hypothesis first requires wrapping your head around the idea that the universe’s most sophisticated life may elect to leave biology behind and live digitally. Having essentially uploaded their minds onto powerful computers, the civilizations choosing to do this could enhance their intellectual capacities or inhabit some of the harshest environments in the universe with ease.

OK, sure, yeah. Maybe. Why not? Evidence would be kind of nice to have, but hey, speculate away. They just guess that extraterrestrial life might be like my laptop, with a “sleep mode” that conserves battery power, just like a 19th century scientist might speculate that alien life is steam-powered and has periods where they cool the boilers and scrape the accumulated scale out of the pipes. Perfectly plausible. Take what you know and extrapolate it far off into the unknown, all while pretending you know exactly what you’re talking about.

The idea that life might transition toward a post-biological form of existence is gaining ground among experts. “It’s not something that is necessarily unavoidable, but it is highly likely,” Cirkovic told me in an interview. 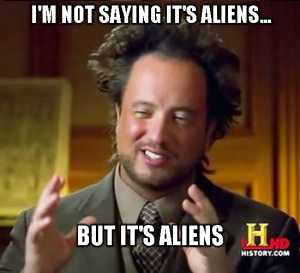 Experts. How do you become an expert in alien species that have progressed so far beyond our known technologies? Especially when you’re willing to recognize that these hypothetical aliens would face challenges on such a cosmic scale that trying to imagine how they would cope with them is like stone age tribesmen trying to come up with an explanation for how to amplify a weak wi-fi signal to reach your deck.

The funny thing is, these guys don’t even believe their own theory.

Interestingly, neither Sandberg nor Cirkovic said they have much faith in finding anything. Sandberg, writing on his blog, states that he does not believe the hypothesis to be a likely one: “I personally think the likeliest reason we are not seeing aliens is not that they are aestivating.” He writes that he feels it’s more likely that “they do not exist or are very far away.”

Cirkovic concurred. “I don’t find it very likely, either,” he said in our interview. “I much prefer hypotheses that do not rely on assuming intentional decisions made by extraterrestrial societies. Any assumption is extremely speculative.” There could be forms of energy that we can’t even conceive of using now, he said—producing antimatter in bulk, tapping evaporating black holes, using dark matter. Any of this could change what we might expect to see from an advanced technical civilization.

Well then, why even propose it?

Yet, he said, the theory has a place. It’s important to cover as much ground as possible. You need to test a wide set of hypotheses one by one—falsifying them, pruning them—to get closer to the truth. “This is how science works. We need to have as many hypotheses and explanations for Fermi’s paradox as possible,” he said.

The important word there is TEST. Very good, smart guys. How do you propose to test it? I don’t mean that silly suggestion they made that we could send a space probe to the alien’s planet and poke the bear, since we won’t have the capability to do that in the foreseeable future, and even if we did, it seems incredibly stupid to propose to annoy some god-like aliens. Inventing empty hypotheses with no means to test them that are so improbable that you think simpler hypotheses are a better explanation is not “how science works”.

Rush Limbaugh’s coronavirus advice » « The center will not hold