A few hundred miles north makes all the difference. 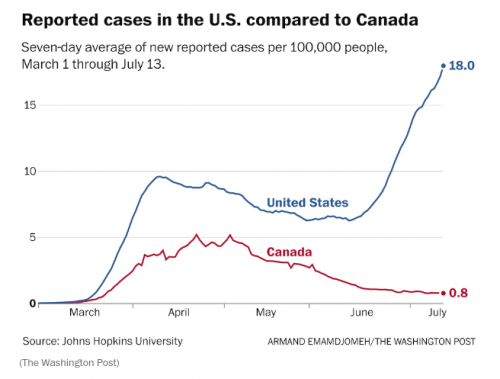 How did this happen?

The Canadian people have been less divided and more disciplined. Some provinces and territories could have locked down sooner, analysts say, but once measures were announced, they were strict, broadly uniform and widely followed.

“It was completely unexpected,” said Gary Kobinger, director of the Research Center on Infectious Diseases at Quebec’s Laval University. “I thought that people would not accept to stay home. … This also helped.”

Michael Gardam, chief of staff at Toronto’s Humber River Hospital, said provinces have mostly been “appropriately cautious” when easing restrictions, in contrast to those states that never imposed closures or stay-at-home orders or loosened controls prematurely.

Researchers at the University of Toronto studying reopenings found that restrictions in Yukon, a northern territory that had 11 ooronavirus cases and no deaths, are more stringent than those in Texas, where hospitalizations are surging.

That last line? That’s the big one. Having a functional health care system is also important.

Grass spiders taking over » « If you’d attended a virtual arachnology meeting, you could look this good