There’s an interesting argument that’s been raging for decades about women’s orgasms: are they useful or not? Normal people, especially women, are probably wondering how that can even be a question — you probably find them very nice — but that’s missing a deeper point, which is, do women’s orgasms increase their fertility? Which I would argue masks an even deeper question, which is about women’s Ultimate Purpose. And apparently, the ultimate purpose of having a woman orgasm is that it makes her cervix more likely to slurp up the manly ejaculate, a phenomenon called upsuck or insuck.

The hypothesis was that muscle contractions during orgasm would propel semen deeper into their bodies, and that as they later relaxed, it would flow back into the mooncup, so they could compare the amount squirted up into the uterus/fallopian tubes/etc. in orgasmic vs. non-orgasmic situations. The prediction was that if orgasm were effective at increasing semen flow into relevant parts of the reproductive tract, they’d see more retention of semen after an orgasm. The answer is…they did. 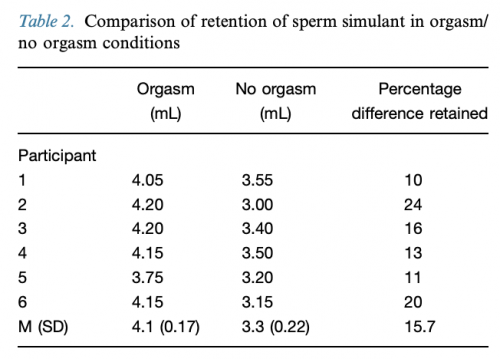 I have a few problems with the study. As already mentioned, it has a minuscule number of participants, but also, it is not at all a blind study. The subjects knew what the expected result should be! I would not accuse them of outright cheating, but it’s very human to see an experiment that is purportedly testing the potency of your orgasms as a judgment, and that maybe a little fudging in one direction or another is acceptable. I’m also wondering why the contribution of the women’s fluids to the outcome wasn’t taken into account; they specifically excluded situations where the women produced female ejaculation, but as the investigators must know, women will produce more vaginal fluids with orgasm than without, which would have contributed to the volumes they measured.

One of the biggest problems of interpretation, though, is that nothing in this study actually tests fertility and the odds of conception. I would take it for granted that triggering vigorous contractions in a muscular, fluid-filled tube is going to move those fluids all over the place, but the question is whether this contributes significantly to successful fertilization. Maybe it does, maybe it doesn’t, nothing in these observations answers that question, or even whether this is a relatively significant factor compared to all the other variables in conception.

But that is the biggest problem of them all. If you’re trying to determine whether there is a selective advantage to a woman having an orgasm, why focus exclusively on the mechanical effectiveness of getting her pregnant? Humans are psychologically and sociologically complex, responsive to all kinds of subtle and not-so-subtle cues, and with a huge amount of individual variation. Looking at what is essentially the very last step in an elaborate courtship dance and declaring that that is the critical thing that evolution is looking at tends to kind of minimize an intricate behavioral complex that is also subject to evolutionary forces.

This reductive, narrow approach to a tiny aspect of a question is a common approach in some disciplines. Another subset tends to view programmed female responsiveness to male signals as the mechanistic goal of evolution. Evolutionary psychology, I’m looking at you.

Adam Driver and I have something in common » « Impeachment? I’m not enthusiastic