Well, this is a stupid sensationalist headline: New Species of Spider Found in Mexico Able to Rot Human Flesh. Yeah, so? This is a common property of many venoms, such as those in some wasps and snakes, and it makes sense that a spider, which relies on injecting toxins and enzymes that break down cells and tissues, would do so. How else would they slurp out the digested guts of their prey? These spiders have no interest in eating people, or “rotting human flesh”, so it’s an obnoxious way to distort the story.

Here’s a pic of the lovely beast in question. 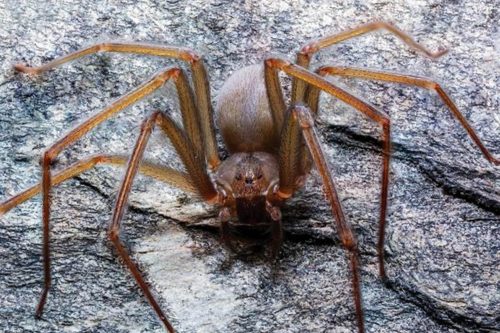 It’s called Loxosceles tenochtitlan, and it’s distinguishing characteristic is not that it has a remarkable venom, but that males and females have unique genitals in a lock-and-key arrangement, which is also common in invertebrates.

In a statement released by the university, Valdez-Mondragon explained the difference: “As L.tenochtitlan is morphologically similar to L.misteca, it was initially thought that it had been introduced to this region by the shipping of ornamental plants. But when doing molecular biology studies of both species, we realized that they are different.” Valdez-Mondragon described the species and noted the difference between L.tenochtitlan and L.misteca lies in the male spider’s palp or the organ that enables touch in arachnids. It is also noted that the female L.tenochtitlan has a distinct looking sexual organ compared to L.misteca. Valdez-Mondragon explains that at first glance, the two species of spiders can look identical, but L.tenochtitlan can be identified because of its dark brown color which is dull compared to the other species and on its back is a very visible violin pattern.

The story goes on to claim that “humans are naturally repulsed at the sight of “creepy crawlies” like spiders.”

The Science Times is not one of my approved popular science sites. Too much trash written by people who have only the most passing acquaintance with science.

That’s one beautiful spider » « This man is not a racist