You know he’s not because he says he’s not. 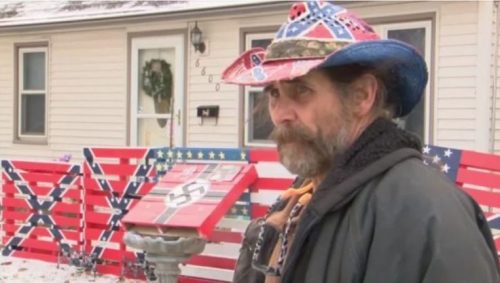 That’s how racism works, you know: if you think a nation founded on black slavery, and another nation that carried out brutal ethnic cleansing, are just peachy, saying the magic words “I am not a racist” absolves you of all blame. You can support policies that promote white supremacy, you can put up Nazi flags like they’re Christmas decorations, you can intentionally put up pallets painted with Confederate symbols and point them at a minority-majority school, but as long as you deny that you’re a racist, you’re safe.

For bonus points, you can get really irate if someone accuses you of being a racist as long as you insist you’re not a racist, and then you can turn it around and accuse them of being racist against white people. What’s really neat-o is that if they then say “I am not racist!” you can smirk knowingly, because you know that everyone who says that is lying.

I am not impressed with your anti-spider bigotry, Science Times » « But I thought they were the law-and-order party?