That’s the best summary of Travis Pangburn ever. It comes from this exposé of the swarm of sock puppets Pangburn has created on Twitter. Besides a small army of Russian bots, he also created a collection of pseudonyms — Dave Schroeder, Heatseeker, PangburnWarrior, SkeptixSocial, Jig, and JanJan, if not more — who parrot and praise him online (it’s fair, since he turns around and praises their wisdom, too). All of those, except Heatseeker and JanJan, responded to me on Twitter yesterday, as did @ThePangburn, of course. It’s all very amusing.

Then I checked out Pangburn’s “battlefield” site, his online forum where people are supposed to air their provocative ideas and argue over them. Pangburn has a proposition that “Antifa is a multi-group organization”, whatever that means (and don’t expect his incoherent writing to clarify it), and oh look, who is commenting favorably on it? 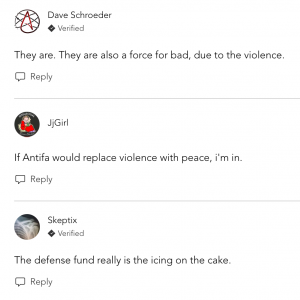 In other sad, disappointing news, Travis is trying to resuscitate his career as a lecture/debate promoter. It’s desperate and pitiful.

Pangburn appears to be in the early stages of rehabbing his relationship with the IDW. He just announced promotion of a live NYC debate in March between IDW-adjacent moderate atheist activist Matt Dillahunty and far-right racist homophobic lunatic felon Dinesh D’Souza. Skeptic magazine EIC and IDW stalwart Michael Shermer has also recently talked up Pangburn on Twitter.

All I can say is…what the fuck are you doing, Matt? First enabling the implosion of the ACA, and now reduced to babbling on a stage with demented hate-peddlers?

Are you boycotting YouTube this week? » « Imagine how much the spiders hate it