You know what it is.

pareidolia
[ˌperēˈdōlēə]
NOUN
the perception of apparently significant patterns or recognizable images, especially faces, in random or accidental arrangements of shapes and lines.
“there could be a mysterious stone coffin on Mars, or, more likely, it’s just the latest example of pareidolia”

We’ve all seen shapes in clouds, or Jesus on a pita, but Mars seems to be a magnet for this phenomenon. This week, William Romoser, a well-known entomologist, presented a paper at the Entomology society meetings in St Louis titled “Does insect/arthropod biodiversity extend beyond earth?”

There is ample evidence to answer the question posed by the title in the affirmative. For several years, I have been engaged in study of the NASA-JPL photographs transmitted to Earth from the surface vehicles sent to explore Mars, Curiosity Rover in particular. These photos are available to the public via the internet. In this poster, I present and discuss numerous examples of insect/arthropod-like forms (fossil & living) found in Mars rover photos. Examples include insect-like forms displaying apparent diversity, clearly recognizable insect/arthropod anatomical features, and flight. Evidence of a fossil reptile-like (serpentine) form and reptile-like forms preying on insect-like forms is also presented. Each example is documented. These findings provide a compelling basis for further study and raise many important questions.

This is the new hobby for old cranks: poring over blurry photographs from exotic places, or odd-shaped rocks, and then leaping to the grand conclusion that it looks vaguely like X, therefore X lives in this place. Remember Mark McMenamin? He found fossil vertebrae, thought they were arranged in a pattern, and decided they were art created by an ancient kraken. Mars is a great font of pareidolia, with Schiaparelli thinking he saw canals, then Percival Lowell thinking likewise, and then there was the Face on Mars, which produced an explosion of very silly books and web pages in the 80s.

Now this guy is spotting all kinds of insects in still photos from the Mars rovers.

“Once a clear image of a given form was identified and described, it was useful in facilitating recognition of other less clear, but none-the-less valid, images of the same basic form,” Romoser said. “An exoskeleton and jointed appendages are sufficient to establish identification as an arthropod. Three body regions, a single pair of antennae, and six legs are traditionally sufficient to establish identification as ‘insect’ on Earth. These characteristics should likewise be valid to identify an organism on Mars as insect-like. On these bases, arthropodan, insect-like forms can be seen in the Mars rover photos.”

Distinct flight behavior was evident in many images, Romoser said. These creatures loosely resemble bumble bees or carpenter bees on Earth. Other images show these “bees” appearing to shelter or nest in caves. And others show a fossilized creature that resembles a snake.

I’ll let you be the judge. Do these look like Martian insects to you? 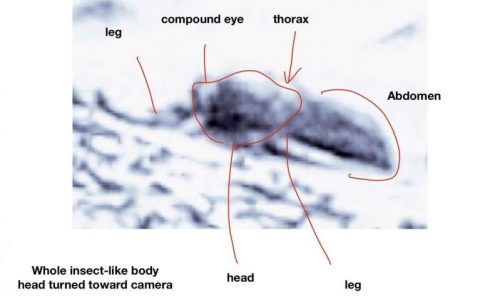 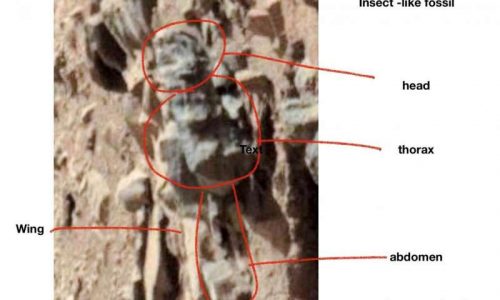 They look like fuzzily photographed rocks with circles and arrows and labels scribbled on them to me. 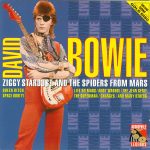 Besides, as everyone knows, there aren’t any beetles on Mars — they’re from Liverpool. Mars is supposed to have spiders.