He’s persistent, I’ll say that for him. I first encountered Mark McMenamin as an enthusiastic promoter of Stuart Pivar’s inflatable donut model of development. He then sank from sight, along with the pretentious septic tank salesmen, until two years ago, when he presented piles of ichthyosaur vertebrae as evidence that a giant cephalopod, a kraken, had been creating Mesozoic art by arranging the disks into a self portrait.

You may laugh now.

He presented at the Denver GSA meeting this year. Here’s his abstract.

THE KRAKEN’S BACK: NEW EVIDENCE REGARDING POSSIBLE CEPHALOPOD ARRANGEMENT OF ICHTHYOSAUR SKELETONS

In 2011, we hypothesized that extremely large Triassic cephalopods may be responsible for certain anomalous aspects of an unusual assemblage of giant ichthyosaur skeletons in the Luning Formation of Nevada. The hypothesis has been criticized by researchers who do not accept the ichnological evidence suggesting that the skeletons were deliberately arranged rather than being deposited by currents.

Hydrodynamic considerations regarding the probability of displacement (PD) of ichthyosaur vertebral centra arrays (n=12) show that three different biserial arrangements have PDs of 17%, 89% and 100% respectively by currents strong enough to displace a single centra. The critical Specimen U array at Berlin‑Ichthyosaur State Park has PD=~100, indicating that it is highly unlikely that the biserial pattern was imparted by submarine currents. The unwinnowed wackestone matrix confirms that competent water velocities did not frequently occur in this deep-water depositional environment. The Luning Formation also hosts Protopaleodictyon ichnosp. and supergiant amphipods.

We recently obtained photographs of a retired exhibit formerly on display at the University of Nevada, Las Vegas, Museum of Natural History. The display reconstructed a well‑preserved Shonisaurus skeleton as it was found in the field. The exhibit is well documented by photographs from a variety of vantage points. The skeleton appears to have been partly disassembled during the Triassic, and a biserial array of centra very similar to the Specimen U array occurs adjacent to the nearly complete skeleton. The UNLV array has a PD=~100, again indicating that the biserial pattern was not the result of current assembly. Finally, at least three of these centra show what may be triangular bite marks removed from their margins.

His latest evidence consists of a second array of vertebrae in a line (that’s right, his earlier remarkable claim was based on a single example of bones in a line), and he is also claiming that a non-random arrangement of the bones can only be explained by an intelligent cephalopod, with no other natural processes possible.

Furthermore, as the Huffington Post credulously (their only mode) reports, he has additional evidence in the form of a giant fossilized beak. Here it is: 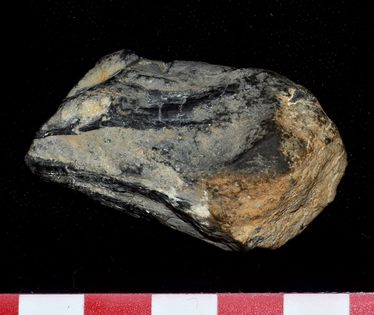 It’s a fragmented, unidentified chunk of rock, a few inches long, which he extrapolates by comparison to a Humboldt squid beak he bought on eBay to be the tip of a giant beak belonging to a squid that was between 50 and 100 meters long.

That’s it. When ichthyosaurs decay, their vertebrae tend to fall in a line, and here’s a broken rock that kinda vaguely looks like a bit of a beak, and from this he builds this elaborate fantasy of a giant kraken roaming Triassic seas crushing ichthyosaurs to death and then sculpting their bones into squid pictures.

He should go back to praising balloon animals.

Whoops. I neglected to mention another indictment of his rationality: McMenamin is a “devout Christian” who also believes in Intelligent Design creationism.

My name is Mark McMenamin. I have completed a PhD on the fossils of the Cambrian Explosion, have published several books on the subject, and am a devout Christian. At the present time I am actively researching the latest fossil discoveries from Cambrian boundary strata.