Some people mentioned I should try focus stacking on my spiders, so I fumbled around and found some inexpensive software to do it, and gave it a shot. Here are a couple of trial runs (including some spiders I photographed in a single plane yesterday. 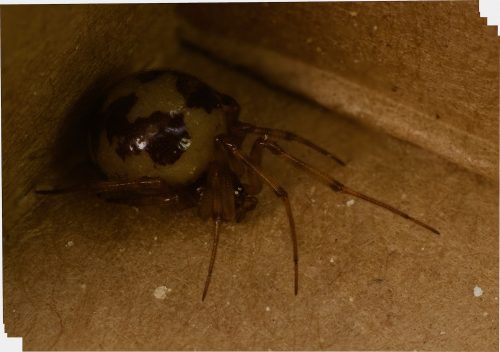 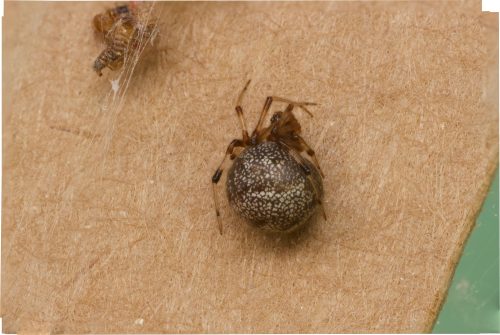 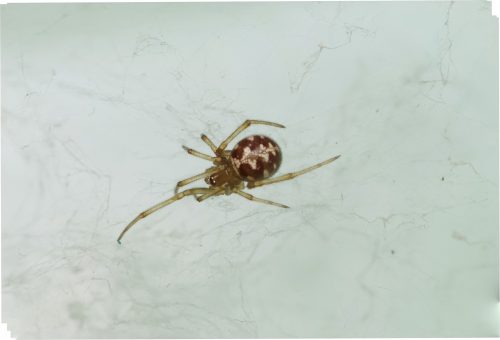 I’m just going to say…nice. Also easy. I always take multiple shots anyway, so I just do what I always do, maybe being a little more careful about centering each shot as identically as I can, and then dumping 4-8 photos into the software. I especially like how the juvenile in the third image turned out, letting me see individual hairs on the legs while not compromising the sharpness of the abdominal pigment pattern.

A few words about how I’m doing this: this is my Spider Studio. 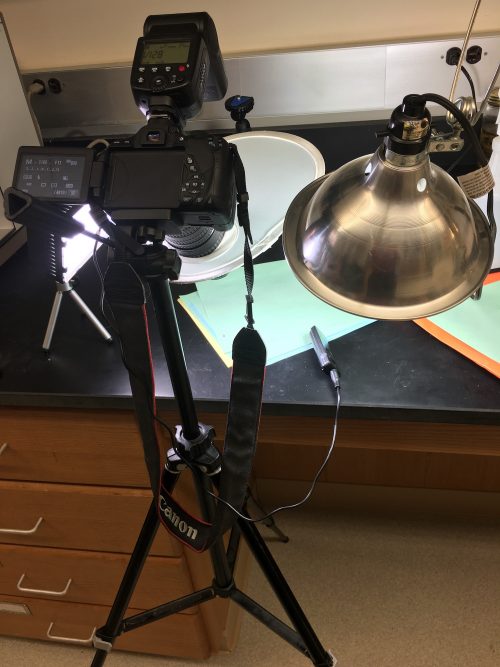 It’s nothing fancy, as you can see. I’ve got a Canon body and a speedlite; I’m using my lovely Tokina macro 100mm lens, with a couple of tube extenders for extra magnification, and there’s also a big white diffuser there. I’ve got a bright LED panel to the left and back, and a simple clamp light with a full spectrum light on a jointed arm.

There are some colored papers on the bench top that I can use for backgrounds, but they don’t matter much with the big adults, who are usually hunkered down in a corner of their cardboard frame. The camera is stationary on a tripod, and I’m doing everything manually, focusing by holding the spider’s container in one hand and moving it back and forth, while in the other hand I’m holding a remote trigger and clicking away madly. The juveniles are contained in these clear plastic boxes, about 5cm square — I just pop off the lid, and there’s plenty of light from all around to illuminate the animal.

Hey, if handheld focus stacking is good enough for Thomas Shahan, it’s good enough for me. I was worried that I was going to need a fancy optical bench and something that would allow me to do precisely calibrated advancement of the camera focus, but nah, it turns out to be far easier than I feared.

I was also concerned because I’d seen all these finicky tutorials about using Photoshop or some other software to prep and align each frame, which was going to be tedious. Nope, don’t need that either: I found a program called Focus Stacker that does automatic alignment and assembles all the images into a single sharp result. It’s totally mindless, which I need: shoot a bunch of images with changing focus, drop them into Focus Stacker, and a few minutes later it presents you with the stacked image. I’m going to do this with all my spider photos from now on!

Starving the colleges » « I’m going to have to disagree with you there, Snopes