The spider colony wasn’t very lively today. Everyone is still bloated from that waxworm feast last week, and even when I threw flies right into their webs they wouldn’t move — they just sat there, at best they might waddle a bit and desultorily wave a claw at such mundane fare. They now expect more. I promised them mealworms for tomorrow, but no, this is not enough, they have acquired a taste for larger prey.

“Bring us man-flesh,” they whispered.

I countered by telling them that in their current state, they weren’t going to be able to run down a baby, let alone a college freshman. They waddled towards me and hissed, which wasn’t too scary. They look like barrage balloons with a couple of feebly waving legs underneath. Like this: 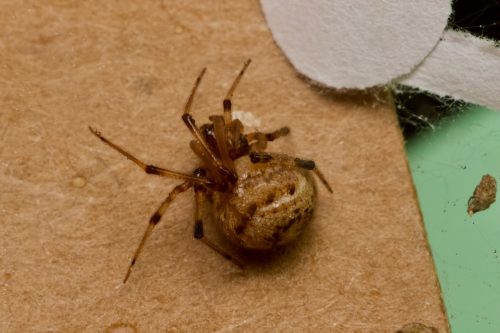 Look at that! She’s not in a state to scamper at all. She’s huge.

Also pretty. Parasteatoda has these mottled rings of pigment in shades of black and brown, not at all flashy, but subtle and elegant. With abdomens so distended, they’re easy to admire, too. (by the way, the white circle top right is scrap from a hole punch, so you can estimate the size.)

They’re also marvelously variable. Here’s another Parasteatoda with an abdomen that looks like it was made up as an abstract mosaic. If you stare at it long enough you’ll see patterns. I’ve got my eyes open for one with Jesus’s face. 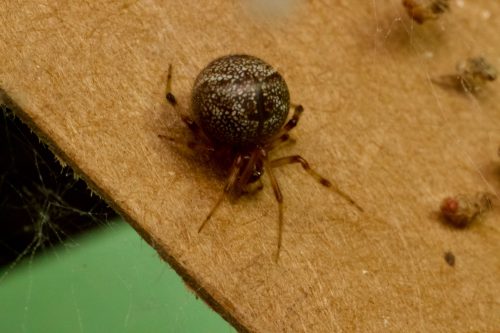 Right now I’ve got a bunch of full-grown adult females that are mostly immobilized by their gluttony, and then a largeish collection of juveniles in the incubator. I’m hoping to upgrade some of them to the larger cages soon — probably over Christmas break — and then I’ve got to introduce males to these young virgins. The Parasteatoda babies really are babies, tiny little spiderlings, that will take a little longer. Meanwhile, the next generation of Steatotoda triangulosa are coming along. 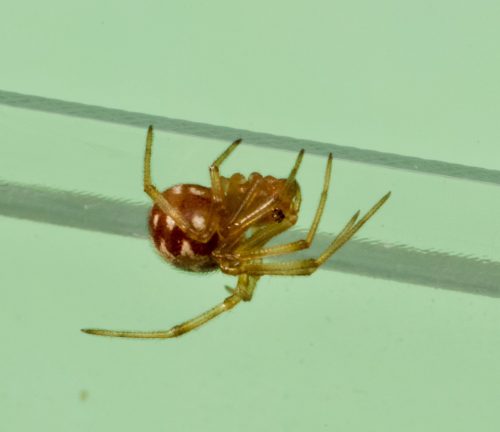 I’ve also got a few S. borealis, but I’m not sure I want to expand their numbers, since the Parasteatoda and S. triangulosa ought to be enough to keep me busy. On the other hand, S. borealis is so goth, with their blackish-purple bodies and gray racing stripes. 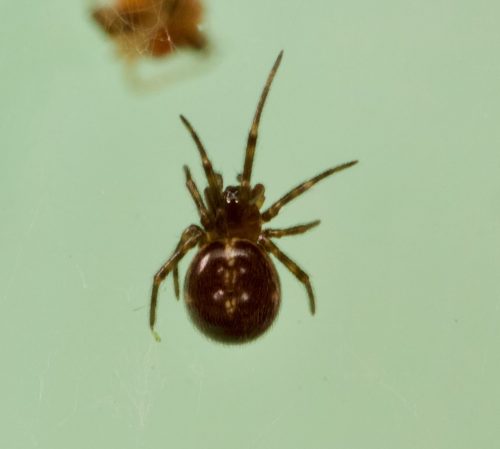 They also grow to a larger size. I may have to keep a few around looking badass.

How did the so-called rationalist community become so gullible? » « Confirmed: We are the baddies