I’m tinkering with getting better images of these silly spiders, and my latest attempt is to build a little itty-bitty photographic studio on a benchtop. I can mount light sources and reflectors on the bench, play with backgrounds, and position specimens where I want — they are extremely obliging models, as long as I’m bringing in the whole cardboard frame their webs are structured around, which is a slight limitation, because the space has to be big enough for not just the spiders, but also their whole cage. I’m also putting the camera on a tripod and locking it down — it’s heavy — and just manipulating the airy light spiders to get them in position. 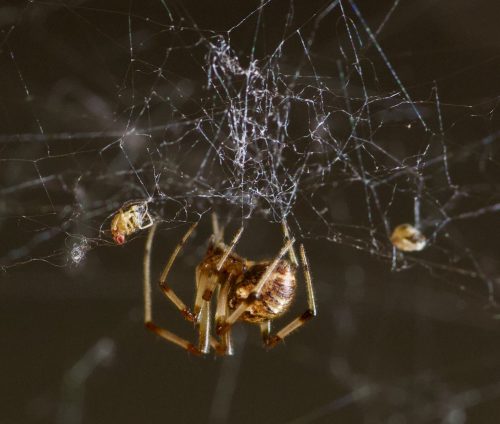 They’re all good girls. As long as I’m not messing with the web, they are quite calm and well-behaved, so I can just leave these venomous spiders out of their cages as long as I want and they don’t try to escape or get aggressive at all, they rest suspended happily while I move gadgets around them. I was also able to get some respectable video out of the set up, too, so you might have that to look forward to, too.

@SciFri is about spiders today! » « Dunning-Krueger applies to MMA, too