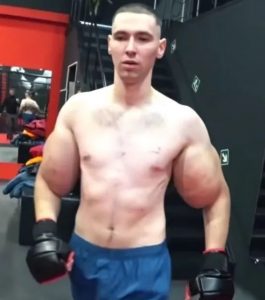 That guy with the bulging biceps is Kirill Tereshin, a “body builder” and MMA wanna-be. He looks strange; his body looks a bit like mine when I was in my teens, skinny and unathletic, but his upper arms are inhumanly huge. He skips leg day, doesn’t do cardio, and his clever idea for working his upper body is to inject his arms with massive amounts of oil. That isn’t muscle, it’s just inert goo squirted in there to inflate their size. I can think of a lot of physiological reasons that that is a bad idea, but here’s another one: he developed an inflated notion of his strength and decided to enter a mixed martial arts fight.

You can watch the whole fight on video at the link. Don’t worry, it won’t take much of your time.

It’s tragic. This guy is doing real harm to himself and is living with a deep delusion. He doesn’t need a coach, he needs mental health assistance.