I am so relieved. If they didn’t, this trip to Skepticon would have been a total waste of time. 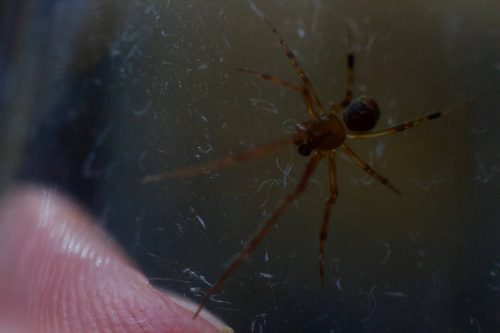 I knew there would be, of course. Although, I took a stroll around the hotel, and it was a wasteland — it looked like the exterior had been hosed down recently, and even the few cobwebs I found were sad tattered shreds. Then I discovered the federal building behind us, and man, the windows there are dense with webs. I saw big ol’ orb weavers hanging out in massive webs that covered an entire picture window pane, and lots of my little pals, Parasteatoda, lurking in the corners. I caught a few, like the male above, that I’ll take home to start a Missouri colony. I’ll go back later and get some more.

One downside is that if you’re hanging about a federal building with a big camera with a long lens, and you keep peering at windows, I guess you look a bit suspicious. A policeman stopped by to ask, “Uh, what are you doing?” I told him, and he watched as I scooped up one in a vial, so I think he believed me. Also, it helps to look like an old white nerd (it shouldn’t, but it does. I also don’t have a Russian accent.)

Oh, and hey, the Skepticon conference starts this afternoon — the young people who organize it apparently don’t believe in getting up before 11am, so you’ve got plenty of time to get down here. Sure, go ahead, you’ve got time to look for spiders before the events start up.