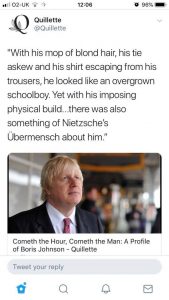 Oh. My. God. They published a piece praising Boris Johnson that, I swear, reads like something from The Onion or McSweeney’s.

With his huge mop of blond hair, his tie askew and his shirt escaping from his trousers, he looked like an overgrown schoolboy. Yet with his imposing physical build, his thick neck and his broad, Germanic forehead, there was also something of Nietzsche’s Übermensch about him. You could imagine him in lederhosen, wandering through the Black Forest with an axe over his shoulder, looking for ogres to kill. This same combination—a state of advanced dishevelment and a sense of coiled strength, of an almost tangible will to power—was even more pronounced in his way of speaking.

It goes on and on interminably, saying nothing. It even quotes some of his more infamous racist lines, like this one, about the Congo:

No doubt the AK47s will fall silent, and the pangas will stop their hacking of human flesh, and the tribal warriors will all break out in watermelon smiles to see the big white chief touch down in his big white British taxpayer-funded bird.

That’s satire, don’t you know. They’re never clear about exactly what they’re satirizing, but like a troop of monkeys, they’ve learned that all they have to do is parrot the word “satire” to excuse their grossest impulses.

Which now makes me wonder…is this entire article by Toby Young, with all its hyperbole and bizarre imagery, also intended to be satire? Is it mocking Boris or praising him effusively? It’s impossible to tell. When two buffoons start mugging at each other, does it mean something, or is it meaningless?

What of Quillette itself? An ugly, tasteless joke, like Johnson’s disparagement of the people of the Congo, or an attempt to be serious by a gang of clowns?

Spiders done been fornicatin’ in my garage! » « I hope we can throw this tweet in his face in 2020