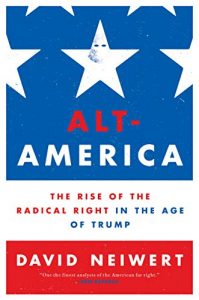 In their mad flailing about to defeat the bad PR about how their site is a haven for racists and misogynists, while trying carefully to avoid alienating anyone who might be bringing them buckets of money, Twitter managed to ban David Neiwert. You know, the David Neiwert, the journalist who has been carefully documenting the rise of the rabid right for decades, who is no friend to these extremists?

Neiwert shared with The Daily Beast the appeal he sent to Twitter:

“My account was suspended because of the photo of the cover of my book in my profile. This book, ‘Alt-America,’ is a history of the rise of the radical right in the United States over the past 30 years. It naturally has an illustration featuring KKK hoods because that is its subject. I am one of the nation’s leading experts on this subject, and it is insane that you would suspend my account because of this photo. I refuse to remove it on principle.”

Alt-America: The Rise of the Radical Right in the Age of Trump was published in 2017 and chronicled the trajectory of far-right and white supremacist groups since the 1990s. Neiwert had used the cover illustration on his Twitter profile without trouble since the book was published.

The problem here is that Twitter insists on implementing the cheapest, most superficial, most easily gamed methods to sniff out bad actors on their medium, meaning that the dishonest thrive and the forthright are silenced. This is not a good sign that they’re getting a grip on the infection they’ve enabled.

I wonder if I’ll get banned for posting the same cover image?

Joe Biden, making promises he won’t keep » « This is correct, they did not teach us about Phyllis Wheatley in school