So this is what skepticism has become, Michael Shermer interviewing racist bigot and cult leader Stefan Molyneux because he is one of the most articulate podcasters for reason. 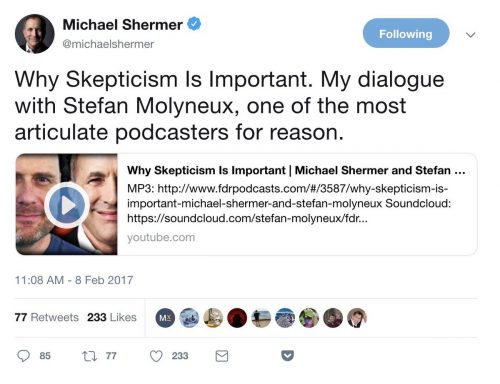 People were flabbergasted. How could he do this? Shermer has an excuse: ignorance.

I’ve done a few interviews in my time, and I always look into the other person ahead of time, if, for nothing else, to have some idea of what topics would provide a good discussion. No, not Shermer! He knew nothing and did zero prep. I don’t believe him, but if I did, that would tell me his podcast has to be total crap.

Don’t you worry about Shermer, though. He’s moving on to grand new projects that won’t be at all skewed by his biases, no sirree bob.

The membership in the Intellectual Dork Web is small and self-proclaimed, so I don’t understand the point of a “scientific survey”. Is this to be an assay where the questions are contrived so he can say that Ben Shapiro and Jordan Peterson aren’t really conservative right-wingers? I trust him to do that about as much as I trust him to honestly vet the people he interviews on his podcast.

Spider party at my place » « Godzilla!