I love watching corporate idiots roasting over an open fire. Delta Airlines tried doing a little gentle union-busting with some posters, and it didn’t go at all well.

Two posters made by Delta as part of an effort to dissuade thousands of its workers from joining a union drew a torrent of criticism after they were posted on social media Thursday.

The posters included messages targeting the price of the dues that company workers would be paying if the union formed.

“Union dues cost around $700 a year,” one noted. “A new video game system with the latest hits sounds like fun. Put your money towards that instead of paying dues to the union.”

The other, with a picture of a football, was framed similarly.

“What does $700 mean to you?” it said. “Nothing’s more enjoyable than a night out watching football with your buddies. All those union dues you pay every year could buy a few rounds.”

Who needs job security, safe working conditions, and better wages when you could just play video games and drink beer? Those posters reveal how much contempt management has for their workers. 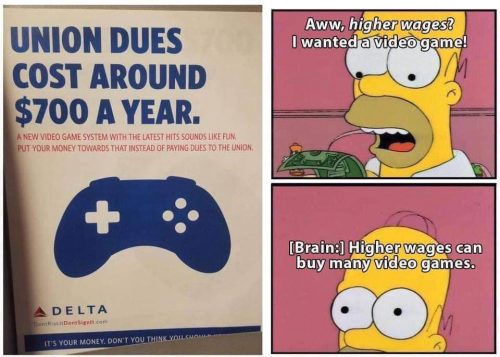 The meme that points out that you can build a guillotine for $1200 is my second favorite.

I guess I’m being sued, I guess » « For my colleagues who are in the throes of grading right now