In late October, 2009, the managers of the Back River Wastewater Treatment Plant in Baltimore, MD sought assistance in mitigating what they described as an “extreme spider situation” in their sand filtration facility. The building, consisting of almost 4 acres (16,099m2) under a single roof but with no side walls, had been prone to extensive colonization by orb-weaving spiders since its construction in 1993. However, the present infestation was considered worse than normal, and the facility’s maintenance and operations personnel had voiced concerns over the potential risk of bites.

OK, I’m already gurgling with anticipation, but then the article is full of photos and graphic details about the magnitude of the webbing. It is amazing and beautiful. They used the volume of webbing and density of spiders to estimate the total population in this building. 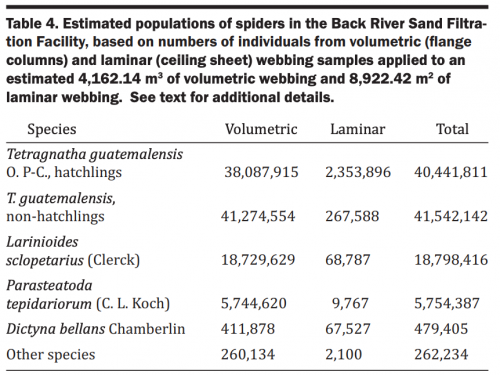 Over 100 million spiders! And just yesterday I reported counting 63 in my garage. I feel so inadequate.

I said there were photos. Behold and be awed. 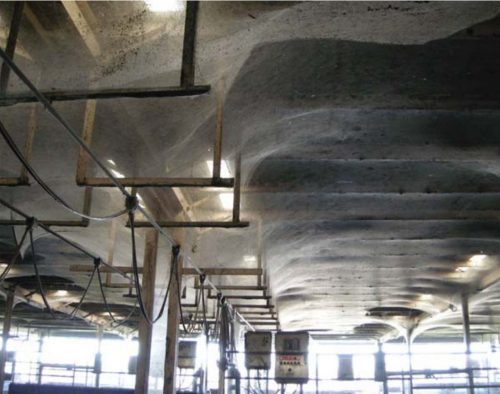 Also impressive is that these are communal constructions — spiders of different species are cooperating to build these vast webs, and are then coexisting in these populous communities. I know we usually think of spiders is predatory cannibals, but they can live in peace and harmony together, especially when prey is abundant…and apparently wastewater treatment plants are also paradisial places for chironomid midges, and they have photos of webbing that is simply caked with trapped midges.

The authors of the paper were brought in to make recommendations about what to do with all these webs. I like their ideas, especially the first one.

1) On-site personnel should be reassured that the spiders are harmless and the facility’s immense shroud of silk should be presented in a positive light as a record-breaking natural history wonder.
2) Pesticides or chemical web-deterrent products, as suggested by local pest control companies, are unnecessary and inappropriate in light of the close proximity to treated water.
3) Web and spider removal is basically a recurring custodial function that should be accomplished by the most feasible mechanical means and on a schedule dependent on the buildup of new webbing.
4) Lighting of the facility is already minimal, and does not seem to be a critical factor in attracting additional spiders. However, more frequent rotational drying of the sand beds might be effective in lowering on-site midge populations.

Yes! Put in a ticket booth, I’d pay to go see this natural wonder. I’m also thinking I ought to contact the city of Morris to see about a tour of our local water treatment facilities.

I am not surprised that local pest control companies were recommending hosing the place down with poisons. They’re innocent and harmless, why kill them?

I thought the Battle of Wakanda was tactically stupid » « Oh no, the Dutch have the disease, too!