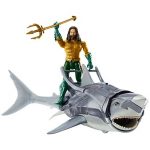 Aquaman. My favorite comic book as a kid, about a guy who can breathe underwater and talk to fish. I was looking forward to this movie, and the trailer had some promising hints…like when, as a boy, Aquaboy is being bullied in an aquarium and all the fish come to the glass and intimidate the bad kids by staring at them. That’s the Aquaman I wanted to see, where the power was all about communication and cooperation with marine creatures.

That’s not what we got. It’s another fantasy movie about a muscle-bound lunk getting his way. I had so many problems sitting through this crap.

On the plus side, if there is one, it’s a pretty movie, in a garishly over-cluttered CGI way. And, uh, that’s all I can think of.

No, really, I’m racking my brain, and there’s nothing to commend this incoherent mess with a star whose charisma rests entirely in his pecs.