Pangburn (Pangburnt, am I right?) Philosophy has officially thrown in the towel. Here’s their final statement: 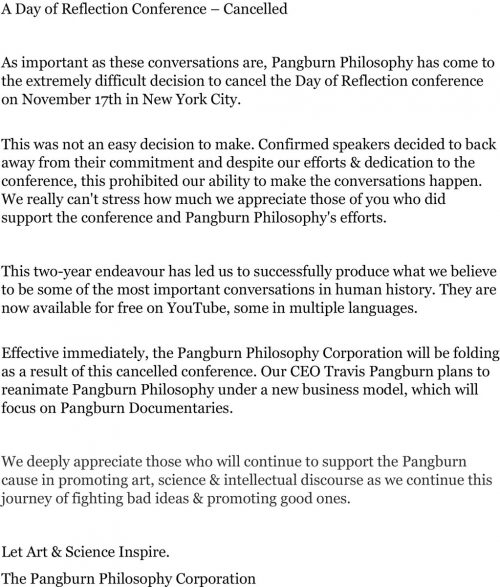 Who is to blame? Not Pangburn! Confirmed speakers decided to back away from their commitment, the lousy no-good bastards.

And then…This two year endeavor has led us to successfully produce what we believe to be some of the most important conversations in human history. Wow. In human history. Pretty impressive for a hodge-podge of racists, edgelords, pompous assholes, and alt-right cheerleaders, say what?

But have no fear.

Effective immediately, the Pangburn Philosophy Corporation will be folding as a result of this cancelled conference.

And there was much rejoicing! But wait. A “Philosophy Corporation”? Have those two words ever been paired before? Maybe this is the end of something unique.

Also, I doubt that all the people who bought overpriced tickets to this shitpile are rejoicing. They’re never going to see that money again. I’m trying hard to feel sympathy for the gullible simpletons who paid money to see Peterson, or Weinstein, or Harris, or any of the deplorables slated as speakers, and failing.

Our CEO Travis Pangburn plans to reanimate Pangburn Philosophy under a new business model, which will focus on Pangburn Documentaries.

Oy. So another Prager U, I’ll guess.

A couple of suggestions. It’s obvious that Travis Pangburn has a bit of an ego, but after your distinctively-named enterprise has just imploded under the weight of debt, leaving your most ardent fans without recompense, and you’re trying to slither away, it’s not smart to keep the name “Pangburn”. Too obvious. You should at least try to slip out from under the PR taint. Find a fresh taint.

You built your ramshackle empire not on your talent, but the appeal of your center-right speakers. I presume you’d like to bring them back under “Pangburn Documentaries”? Then it’s a bad idea to blame them for your failure.

Oh, and speaking of pretentiousness, you have to look at the Pangburn “about” page. It’s mostly a close-up photo of Travis’s handsome, serious face, a paragraph of grade-school “philosophy” about saving the planet with art and science, and an equation. Can I just say how much I despise the attempt to come up with a pseudo-sciencey equation with vague and immeasurable variables and invented relationships between the parameters? It’s a great metaphor for the nonsensical crap they’ve been peddling.

Fruitfulness multiplied by humanism equals peace greater than suffering? What kind of ludicrous bullshit is this? Who gets snowed by that kind of nonsense?

I AM PARTYING TONIGHT! » « Life without rising inequality is very much like life with socialism