I really don’t understand the logic of Trump’s trade war. Throwing up trade barriers might be a great idea if you’re trying to build up an internal industry in a relatively undeveloped economy, but the US has a mature economy. I could sort of see it if we were looking at how our homegrown semiconductor manufactory had declined and moved to Asia, and we wanted to build it back up, but that’s not what we’re doing: Trump seems to think we need to grow our coal and oil industry. Is our future tied to work that doesn’t require much education or deep, complicated infrastructure? It’s looking backwards.

But I’m not an economist. Feel free to explain the logic here, if there is any. 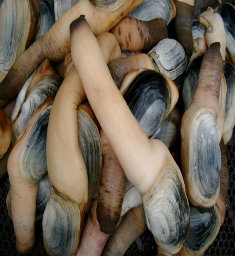 Also, now that the Chinese trade retaliation has kicked in, it seems to be having all kinds of unexpected side effects…like on the geoducks. The Washington state geoduck harvest is in trouble!

The People’s Republic of China announced last month a 25 percent tariff on American seafood products, including geoduck, in response to tariffs instituted by The Office of the U.S. Trade Representative. China’s announcement that the tariffs would take effect July 6 came shortly after a May 30 auction by DNR, which awarded eight companies the rights to harvest wild geoduck from tracts in Puget Sound between July 3 and Sept. 28, 2018.

DNR auctions the right to harvest geoduck from state-owned aquatic lands four times a year, generating more than $21 million annually. That money is used to restore and enhance Washington’s aquatic lands. The May 30 auction generated $5,491,256.

To minimize the impacts from the tariffs on Washington’s geoduck industry, DNR notified successful bidders on June 26 they may be entitled to refunds if the tariffs hurt geoduck sales.

This is a big business, and it’s focused largely on Asian markets.

According to the National Marine Fisheries Service, the U.S. Customs counted over five million kilograms of geoduck leaving Washington last year, for a total of $75.8 million in geoduck exports. Of that amount, $69.5 million were made in shipments to China and Vietnam alone. Increasing demand has encouraged shellfish farmers to pressure the state to expand access to geoduck beds.

Meat from a geoduck is considered a delicacy in China and it can be sold for around $100 per pound in foreign markets. Stateside, companies bid hundreds of thousands of dollars to gain access to plots of land for harvesting.

On the bright side, this ought to have some positive environmental benefits — less commercial mollusc murder. But our current administration doesn’t exactly have a reputation for caring about the environment. It does have a reputation of supporting business interests uber alles, but this kind of decision actively harms capitalist exploitation. Somebody explain this to me, because it all sounds stupid and backwards and destructive of any principles this Republican fascism might have.

Maybe the simplest explanation is that they don’t have any principles.