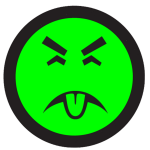 I’ve been an avid devourer of science fiction for decades, so it’s a little odd that I’ve missed out on this anthology, Writers of the Future. It’s been cruising along for 34 years, and apparently they throw a colossal, glitzy gala in Hollywood every year, flying in the authors and partying…for a week? Jeeez, writers…so spoiled, they’re all just rolling in the dough.

And here I’ve never even seen the books, let alone paid for one. How are the publishers paying for this? Oh, here’s the answer. 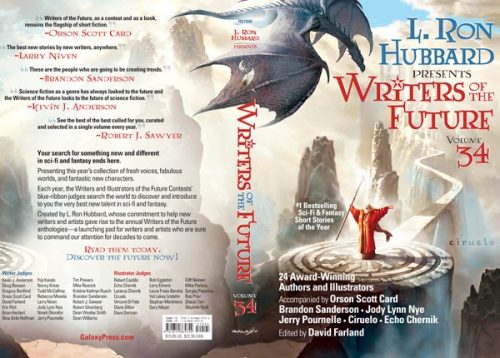 Yikes. “L. Ron Hubbard presents…” — that’s as good as slapping a glowing green Mr Yuck sticker on the cover as far as I’m concerned. No way would I ever pick up something like that, but at least we know how a few authors can get treated swankily. It’s by selling out to a corrupt criminal cult. Tony Ortega has been writing about this PR gimmick for years, but still authors fall for it and still participate, and they should be embarrassed. Also because paying homage to an extraordinarily schlocky pulp author who founded a religion should be something to be ashamed of.

The bad news is that if you get published in Writers of the Future, no one will read it except Scientologists, and everyone who sees your name listed there will know you’re a sellout. The good news is that no one will crack the cover to see your name on the roll of the shameful.

I volunteered for this? » « O my fellow Academics, this poem will rip your heart out with its truth