Uh-oh. Gad Saad is polluting the discourse again, this time in a vain attempt to discredit the concept of toxic masculinity. It’s embarrassingly bad. I would say that you need to first understand the concept if you hope to debunk it, and Saad does not; if you do not, then all your floundering about will simply reinforce the idea and lead you to use examples that actually demonstrate the phenomenon.

Toxic masculinity is actually not that hard to understand. It’s not a rejection of masculinity itself; it’s a problem that arises when men are socialized to conform to a cultural stereotype that doesn’t actually match their nature.

bell hooks wrote this quote in her chapter called Comrades in Struggle: “…Yet the poor or working class man who has been socialized via sexist ideology to believe that there are privileges and powers he should possess solely because he is male often finds that few if any of these benefits are automatically bestowed him in life.” One of the “powers” that men are socialized to believe that they have to embody is masculinity. Masculinity seems to be the running force of patriarchy, but this term has a very specific definition under patriarchy that is not inclusive of all forms of masculinity. This phenomenon is called toxic masculinity. Toxic masculinity “refers to the socially-constructed attitudes that describe the masculine gender role as violent, unemotional, sexually aggressive, and so forth.”

Sounds familiar, doesn’t it? It’s the stereotype of the steely-eyed muscular man who compels women to obey his will. The True Man is sexually aggressive. And what does Gad Saad do? He opens with examples of animals that engage in aggressive competition for mates!

Female fiddler crabs and hens prefer males with extravagantly large claws and tails respectively. Ewes (female rams) will mate with the ram that wins the brutal intrasexual head-butting contest. They reward targeted aggression by granting sexual access. Needless to say, there are innumerable other examples of sexual selection that I might describe, but I suspect that you get the general gist. Are rams exhibiting toxic masculinity? Are female fiddler crabs succumbing to antiquated notions of masculinity as promulgated by the crab patriarchy?

We are not crabs or rams. Saad has cherry-picked a few examples of species with the ideal behavior he’d like to see humans exhibit, which curiously enough, are all about sexual aggression, males beating up on each other to win access to mates. Not only is this the naturalistic fallacy, not only is this selective use of the data, but it also reveals that he doesn’t know what toxic masculinity is. You need to look at animals with more behavioral plasticity and a greater range of potential roles to see toxic masculinity, where among a range of possibilities, males are confined to a narrower and often uncomfortable role by cultural pressures. Rams and crabs do not have that flexibility.

Let’s now apply the exact same evolutionary process (sexual selection) to humans. Evolutionary psychologists have documented universal patterns of mating preferences that are invariant across time and place. In no culture ever studied have women repeatedly preferred to mate with pear-shaped, low-status, tepid men possessing high-pitched, nasal voices. In no documented culture do women’s sexual fantasies revolve around granting sexual access to unemployed, unambitious men who occupy the lowest stratum of the social hierarchy.

First, yes, let’s look at human evolution. The lesson ought to be that humans have not evolved by a strategy of beating up your competition, mating, and wandering away, like a ram or a crab. Relationships between males and females have been far more complex, involving prolonged association, integration with larger social groups, and shared responsibilities in food gathering and child rearing. The “exact same evolutionary process (sexual selection)”? Nonsense.

As for his ideal preferences by women, I will note that both Saad and I share similar physiques, lack a booming baritone, and are in professions that aren’t regarded as particularly manly, and in fact are being ‘taken over’ by women, numerically. Yet we’re both married! And, I assume, we’re both married to women who are happy with their choices! How did that happen?

He also sneers at unemployed, unambitious men who occupy the lowest stratum of the social hierarchy, and yet, unemployed men somehow acquire willing partners. They can even be good partners. I have to think of my own parents, who were loving and dedicated to their family, who were also part of the lower classes that Saad would probably spit upon, and had qualities that Saad has elided — my father was a caring parent, hard-working, a good storyteller, loyal to his friends, sociable, and thoughtful. My parents married for love, against the wishes of her parents, yet most of my childhood was spent watching him bounce from job to job, struggling to get a reliable income, not because he was lazy and unambitious, but because good jobs were hard to find and fleeting when you got one in Seattle in the 1960s-1970s.

Saad relies on stereotyping of lowest stratum men, deciding that they’re ugly and undesirable, and that no woman would desire them, despite the obvious evidence that they do. That’s toxic masculinity! It’s the judgment that there is an ideal man based on a narrow, biased set of criteria, and then heaping contempt on the men who don’t match it in every particular.

Then he uses this bias to stereotype women.

Instead, women are attracted to “toxic masculine” male phenotypes that correlate with testosterone, and they are desirous of men who are socially dominant, who are strategically risk-taking in their behaviors, and who exhibit patterns of behaviors that will allow them to ascend the social hierarchy and defend their positions from encroachers.

Jesus. How did I ever end up with an attractive, intelligent wife? I’ve never had to battle encroachers, ever. Maybe it’s because Saad’s entire argument rests on denying the richness and complexity of human interactions.

Of course this does not imply that women are not attracted to intelligent, sensitive, kind, warm, and compassionate men. The ideal man is rugged and sensitive; masculine and caring; aggressive in some pursuits and gentle in others. Think of the male archetype in romance novels, which is a literary form almost exclusively read by women. He is a tall prince and a neurosurgeon. He is a risk-taker who wrestles alligators and subdues them on his six-pack abs, and yet is sensitive enough to be tamed by the love of a good woman. This archetype is universally found in romance novels read by women in Egypt, Japan, and Bolivia, precisely because it caters to women’s universal evolved sexual fantasies.

When engaging in sexual role-playing in the bedroom, few women ask that their male partners wear their Google C++ programmer uniform. They ask for the fireman suit to make its presence. James Bond, the epitome of “toxic masculinity,” does not cry at Taylor Swift concerts. His archetype is desired by women and envied by men. 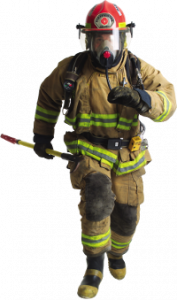 Wait…a “fireman suit”? Like this? Once again, Saad seems to confuse reality with fantasy. Most women are going to have a more realistic attitude towards prospective partners.

I do agree that James Bond is an epitome of “toxic masculinity”, and he makes my case for me. If you desire to be like Bond, you are going to be an aspiring asshole. This is not a good thing. I shouldn’t have to say that, but really, not a good thing. I’ve also noticed that James Bond movies are not particularly popular among women — they tend to notice that all of his partners end up murdered or abandoned. And how do you know he doesn’t cry at Taylor Swift concerts? It seems to me that women would favor men with shared passions, and this claim that a truly desirable man would not be brought to tears by music is yet another example of toxic masculinity.

The inimitable equity feminist Christina Hoff Sommers wrote a book back in 2001 titled The War Against Boys: How Misguided Feminism Is Harming Our Young Men (see our chat on my show THE SAAD TRUTH_144 (link is external)). How prescient she was! There has been a relentless ideological attack on masculinity, stemming from radical feminism, the most recent example of which is the bogus term “toxic masculinity.” It literally seeks to pathologize masculinity in ways that are profoundly harmful to the existential sense of self of young men.

But this whole essay is about pathologizing masculinity! Men are supposed to have six-pack abs, be rich, and live like James Bond — if you were seriously concerned about the existential sense of self of young men, you wouldn’t be promoting these ridiculous and harmful delusions about how men should be. You wouldn’t be setting up rams butting heads as an evolutionary ideal for human beings. There has not been on ideological attack on masculinity by anyone other than the anti-feminists, who set up this unrealistic cartoon of how men are supposed to be that denies the reality of human potential — that thinks that men should be more like James Bond than Mr Rogers. (By the way, if we were setting up an artificial ideal that said all men have to be like Mr Rogers, that would be a different kind of toxic masculinity, perhaps more benign, but also denying the range of human lives.)

Saad really needs to step back and look at what feminists actually say about toxic masculinity.

When men seek that control — when we feel it’s our due — and don’t achieve it, we can resent and hate. Toxic masculinity sets expectations that prime us for disappointment. We turn that disappointment on ourselves and others as anger and hatred.

Rather than that phony, Christina Hoff Sommers, perhaps Saad ought to be reading a real inimitable feminist.

All men support and perpetuate sexism and sexist oppression in one form or another … Like women, men have been socialized to passively accept sexist ideology. While they need not blame themselves for accepting sexism, they must assume responsibility for eliminating it.

When Elon Musk heard the word “colonizer” in Black Panther, did he think it was a compliment? » « I have a feeling I’ll just be ignored if I mention this to the administration