This is a sad, wounded, immature giant squid dying in a harbor in Spain. 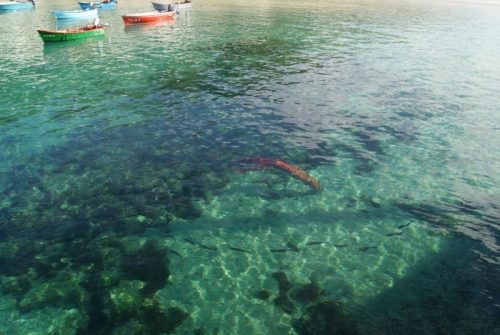 It was wounded by fellow giant squid, bigger than she was, and hungry.

Off of northern Spain, giant squid often feed on schools of fish called blue whiting. The schools swim 400 meters or less below the surface, while the squid prefer to hang out around a mile deep. The squid must ascend to hunt, probably seizing fish from below with their tentacles, then descend again. In this scenario, a squid could save energy by pirating food from its neighbor rather than hunting its own fish, Guerra says: If the target squid has already carried its prey back to the depths to eat, the pirate could save itself a trip up to the shallow water. Staying below would also protect a pirate from predators such as dolphins and sperm whales that hang around the fish schools.

If a pirate happened to kill its victim, it would also reduce competition. The scientists think that’s what happened with the Bares squid: Its tentacles were ripped off in the fight over food. “The victim, disoriented and wounded, could enter a warmer mass of water in which the efficiency of their blood decreases markedly,” the authors write in a recent paper in the journal Ecology. “In this way, the victim, almost asphyxiated, would be at the mercy of the marine currents, being dragged toward the coast.”

It’s a squid eat squid world out there.

Why, what a nice birthday present » « What will destroy America now?