Over the weekend, a shocking email was sent out to supporters of GeekGirlCon, the Seattle con notable for it’s focus on women and women of color. Five people abruptly announced their resignations in protest of events they did not describe in detail.

“This action is not a step taken lightly,” the letter stated. “Many of you are our friends. Many of you we consider family. This team has a long history with GeekGirlCon, including some of us who were there at the start, and all have worked very hard to support its mission and values. We are disappointed and saddened that it has come to this. However, actions by the ED and by the Board have made the current environment one in which it is impossible for us to continue.”

The resigning volunteers made up the bulk of GeekGirlCon’s operations staff, meaning they were responsible for planning and executing the annual convention that draws upwards of 11,000 attendees. The convention describes itself as “a celebration of the female geek,” and as an inclusive space for minorities in science, technology and geek culture.

The five accused con management of terrible mistakes, at least as stated in the protest letter.

1. Acts of discrimination carried out by the Executive Director in the removal and eventual reinstatement of a Con Operation staff member.

2. Opportunistic and underhanded voting tactics by the Board of Directors, including:

3. Bullying of staff members and making derogatory statements to them about their mental and/or physical condition.

4. Dissemination of printed documents by the Executive Director that include details of private, sexual encounters, unrelated to GeekGirlCon, in an effort to discriminate against and kink-shame a volunteer.

5. Questionable use of charitable funds by the Executive Director.

6. Deprioritization of financial oversight by the Board of Directors.

7. Failure of the Board of Directors to provide any recourse for reporting ethical violations made by the Executive Director.

Email accused board & ED of GGC @michelecdomingo of racism and discrimination. Context explained to me: against white men and women. pic.twitter.com/OuNGxlByat

New information has been trickling out. The con has issued a formal statement. It turns out that the gender discrimination was against men, and the racism was reverse racism against white people, so they wanted the women of color who run the whole show kicked out. They didn’t bother to disclose that.

It actually worked to panic people. Five people, without the support of about ten times that number involved in the organization, intentionally abused the con mailing list to sabotage the con. When I looked up the four people who were named, it was two white men and two white women. It is not a good look when white people accuse people of color of racism, and underhandedly try to undermine them. 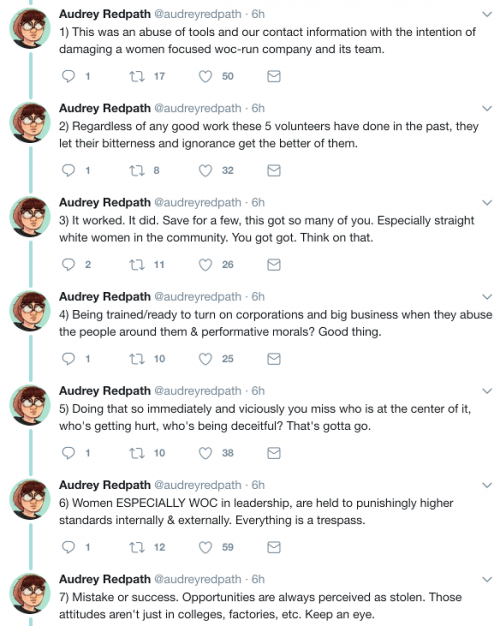 Current word is that GeekGirlCon will be going on, at the end of September in Seattle. Wish I could go — the location is wonderful, but all these cons that go on in early Fall when I’m trying to get classes rolling are poorly timed for me.