I’ve heard these same accusations made out of context, and I’m ashamed to say that I did not bother to track them down. I will in the future, because I’m familiar with how creationists distort quotations, and this is just classic dishonest manipulation.

Recently, Michael Shermer (of whom I’m generally a fan) [pzm is not] claimed that Sandra Harding, a philosopher of science and influential feminist, had called Isaac Newton’s “Principia Mathematica” a “rape manual.”

Today, I read a similar statement from an anonymous source shared on Facebook which claimed that feminist and philosopher Luce Irigaray called the equation e=mc2 a “sexed equation” because she argues that “it privileges the speed of light over other speeds that are vitally necessary to us”. The original source of this claim is apparently a criticism of her work by Alan Sokal and Jean Bricmont published in 1997.

Both cases were repeated by Richard Dawkins (of whom I’m also generally a fan) in a 1998 essay entitled “Postmodernism disrobed.”

In both of these cases, the feminists were using what educated adults should know as a “rhetorical device.” In the former case, Harding was using sarcasm in her criticism of Sir Francis Bacon; in the second case, Irigaray was taking a critic’s argument to its (absurd) logical conclusion. 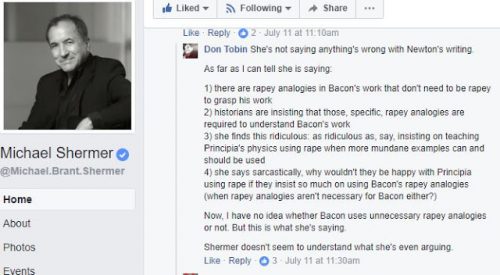 When we actually read what these feminist authors have said, it’s actually far more nuanced than anti-feminists claim. Here’s Harding:

One phenomenon feminist historians have focused on is the rape and torture metaphors in the writings of Sir Francis Bacon and others (e.g. Machiavelli) enthusiastic about the new scientific method.
…But when it comes to regarding nature as a machine, they have quite a different analysis: here, we are told, the metaphor provides the interpretations of Newton’s mathematical laws: it directs inquirers to fruitful ways to apply his theory and suggests the appropriate methods of inquiry and the kind of metaphysics the new theory supports. But if we are to believe that mechanistic metaphors were a fundamental component of the explanations the new science provided, why should we believe that the gender metaphors were not? A consistent analysis would lead to the conclusion that understanding nature as a woman indifferent to or even welcoming rape was equally fundamental to the interpretations of these new conceptions of nature and inquiry. In that case, why is it not as illuminating and honest to refer to Newton’s laws as “Newton’s rape manual” as it is to call them “Newton’s mechanics”?

Wait, what, you say? Bacon used rape metaphors? Yes, he certainly did. Here’s ol’ Francis arguing that we should study even fringe subjects or superstitions to try to unearth the actual causes (a sentiment with which I must agree):

Neither am I of opinion in this history of marvels, that superstitious narrative of sorceries, witchcrafts, charms, dreams divinations, and the like, where there is an assurance and clear evidence of the fact, should be altogether excluded. For it is not yet known in what cases, and how far, effects attributed to superstition participate of natural causes; and therefore howsoever the use and practice of such arts is to be condemned, yet from speculation and consideration of them (if they be diligently unravelled) a useful light may be gained, not only for true judgment of the offences of persons charged with such practices, but likewise for the further disclosing of the secrets of nature. Neither ought a man to make scruple of entering and penetrating into these holes and corners, when the inquisition of truth is his sole object.

Harding is not literally accusing him of writing a rape manual; she’s pointing that his science is viewed through the lens of a man living in a profoundly sexist culture. Bacon is not arguing that we ought to rape people to discover the truth, but Harding is showing that he is unperturbed by metaphors about “a man…penetrating holes” because his society sees nothing wrong with poking into things against others’ will, an attitude that doesn’t just affect relations between men and women, but is going to be reflected in an era of colonialism.

If you’re going to seriously study the history and philosophy of science, you don’t get to just say one set of words have profound meaning, while another set is to be clearly dismissed as irrelevant. This is the whole point of that dirty word, post-modernism: scrutinize what people said and put it in a context of meaning. Bacon’s word choices are seen as interesting and revealing, and we should recognize that even great scientists aren’t free of biases.