It’s the disease of ignorance, Christianity, conspiracy-theorizing, and the kind of raging right-wing poison that inspires garbage like this. 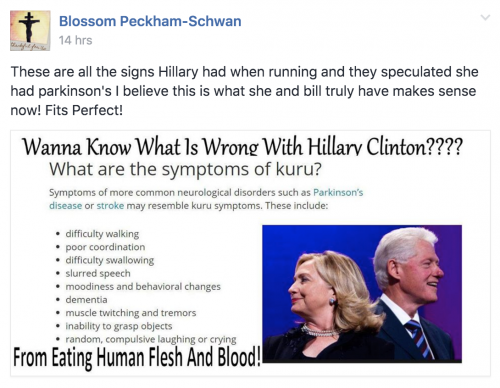 Those are the symptoms of kuru — they just copied them off a med site on the internet. They do not apply. Hillary and Bill Clinton do not have kuru. I have a special contempt for assholes who try to assign specific medical diagnoses on the basis of simple prejudice and stupidity.

In case you’re wondering where the hell this lunacy came from, it’s Facebook, obviously, and a group called “Pizzagate”. You don’t want to go there. These are the worst human beings.