I went down the rabbit hole for a little while this morning. It started here: I was sent a link by Trey Smith about the TRUMP: the COMING LANDSLIDE. ~Ancient Prophecy Documentary of Donald Trump. With a click-bait title like that, I had to start watching the video. And then Trey Smith is mesmerizingly weird: his technique is to stick half his face right into the camera, and make lots of hand gestures with a computer screen in the background. It was effective at first just because his tics and odd movements and emphatic phrasing were engrossing, but I didn’t last long, because there’s no substance there. He seems to think Trump is destined to be president, but his main argument is numerology and ‘because the Bible’ with lots of finger stabbing at the video screen behind him.

So I switched to some of his other videos, and of course he’s a Young Earth Creationist, and he’s very impressed by something that has become a veritable obsession with YECs in the last decade or so: preserved soft tissue in fossil dinosaur bones. And that led him to Mark Armitage.

“Who?” I hear many of you asking. He’s one of those YECs who went off to try and get an advanced science degree and a legitimate job in science so he could use it as a platform to preach that the Earth is less than ten thousand years old. He didn’t get very far. Here are his credentials.

Mark H. Armitage was an Adjunct Professor of Biology at Azusa Pacific University, a Christian college. He received his “Masters Degree” from the regionally unaccredited Institute for Creation Research Graduate School (although his M.S. degree is recognized by the U.S. Department of Education). He is currently affiliated with the Creation Research Society, operating and maintaing a working electron microscopy lab there (SEM and TEM). He also serves on the Board of Directors.

His main claim to fame is that he was hired by California State University Northridge as a microscopy technician for a few years, and then was fired. Not only did he land a sort of academic job, he was martyred for his religious beliefs! Only the story was far messier than that.

It all started in late 2009, when he applied for the lab tech job at CSUN. He was interviewed by two biology faculty and the head of technical services. He claims to have mentioned that he was a young-earth creationist, but they hired him anyway. In his deposition, he mentions that his creationist views were kept hidden from most of the staff for years. In May 2012 he went out on a dig with some other young-earth creationists explicitly to find dinosaur bone so he could do his own analysis and see if they contained soft tissue in them, as originally reported by Dr. Mary Schweitzer almost 20 years ago. (Her work continues to be used by creationists to claim that the earth is only 6000 years old, even though she herself does not support this view—and there are lots of critics who don’t believe it’s really original dinosaur tissue, but various bacterial biofilms and other contaminants). Sure enough, he finds what he claims is “soft tissue” inside a piece of Triceratops horn.

In June 2012, he reported on his preliminary results at a creationist meeting, was interviewed in a creationist podcast about it, and then started telling CSUN biology students that the earth was only 6000 years old because of the soft tissues in dinosaur bones. This is reported to the faculty, and then to the new Department Chair, Dr. Ernest Kwok, and soon the entire department is in an uproar. The day that Armitage’s paper is published on line (Feb. 13, 2013), they have a meeting about his activities, and on Feb. 27 he is let go. (Keep in mind that he was only on a part-time temporary lab tech job, not a tenure-track job where there are very strict rules about hiring and firing. As a part-timer in academia myself now, I know that my job standing is very fragile, and they can let me go or reduce my part-time course load—and my income—at any time with minimal notice). In July 2013 he filed a complaint with the State of California, and on July 24, 2014, his lawsuit was filed.

There are some telling bits in that story. “They hired him anyway” — not only does that shoot down any claim of religious bias, since they knew exactly what his religious beliefs were, but it also tells you about the nature of the job. He was a technician. This is a very important job that often requires considerable skill, but it’s not a scientific position (although I have known technicians who go above and beyond their job requirements and can make valuable contributions…but a YEC is not going to be able to do that). And then we see where trouble emerges: he abuses his status at CSUN to misinterpret evidence, preach to students, and mangle evidence at a creationist meeting, while pretending to have the authority of the university behind him. He was justifiably fired. 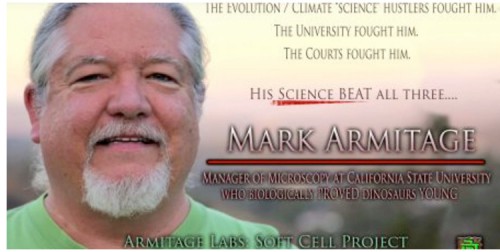 He’s still claiming to be “Manager of Microscopy at California State University”. Nope. He was fired. Note that below that he mentions something called “Armitage Labs”, not telling you that this is not at CSU, but at Creation Research Society, a decidedly less prestigious place. Of course, I’m also a little peeved that a creationist organization has the resources to buy a TEM and SEM for Armitage to play with, while my university can’t.

I’ve also butted heads with Armitage — I critiqued a terrible paper he wrote, which prompted him to angrily reply and led to an annoying number of nasty emails. But then, I did hurt his feelings.

…this was the first paper ever to study the development-reproduction tradeoff in long-term ecological adaptation by studying neither development nor reproduction nor ecology nor evolution, and that analyzed the strategic options of populations with no population data at all. Who would have thought one could study that with a few SEMs of individual trematodes? My hat is off to you, sir. I would have thought it impossible, unrealistic, and irrelevant, but you have convinced yourself that you have done it.

He taught me a lesson, though, calling me Putrid Zany Myers after that. Now I’m terrified of ever saying anything about his ‘work’ ever again.

Oh, wait, no, I guess I kept debunking his garbage. Damn. That “Putrid Zany” remark was brutal, and it didn’t work. I also criticized the creationist interpretation of Mary Schweitzer’s work — she’s the one who found soft tissue imbedded deep in T. rex bone — and that annoyed Armitage immensely, and he responded with a diatribe I completely missed.

If you knew anything Dr. Meyers, about the microscopy of osteocytes – living osteocytes – (and we are not talking about epithelial cells) you would know that delicate ultrastructure – and I am talking fine filipodia approaching 500nm in width, decay WITHIN DAYS of the death of an organism. We microscopists have to use quick acting preservatives and process bone tissues immediately ON ICE to preserve the kinds of structures you can see on the Triceratops osteocytes in my paper:

The reason we creationists are very excited about this work – the reason you and Jack Horner and Mary Schweitzer are backpedalling FAST on this issue now is because EVERYBODY knows this kind of ultrastructural preservation is MIRACULOUS. Osteocytes do not sit around with these kinds of structures for 10,000 years – let alone 68 million years.

Actually, I have done a fair bit of microscopy — EM, SEM, epifluorescence, confocal, etc. — and am familiar with the difficulty of preserving fine structure. I am baffled by one thing, though: if filopodia decay WITHIN DAYS, exactly when was that Triceratops specimen you were examining killed in the Great Flood? Last Thursday?

I don’t see how you can claim Schweitzer is running away from the topic, since she’s published a couple of papers just this year, including one to rebut the idea that the soft tissue is a result of bacterial contamination. Do keep up.

But Schweitzer also accepts the fact that these fossils are tens of millions of years old. It’s not about miracles at all, but trying to figure out what processes would isolate deep cells from mineral replacement, and what degree of preservation is present.

Secondly – you should resist the temptation to comment about things you have not done your homework on. Seriously, you are embarrassing yourself because Mary Schweitzer showed in her 2013 paper that these osteocytes contain HISTONES inside their nucleoli. This is direct evidence that there is MIRACULOUS preservation of autogenous molecules inside these bones – and in my case, inside a highly vascular, mud embedded Triceratops horn (not a deeply buried heavily encased limb bone).

No, I read that paper. It’s very provocative. She showed that reagents like DAPI (which stains DNA) and antibodies to avian tubulin, actin, and histones show some reactivity, which is kind of neat. She was also conservative in her interpretation.

These data are not sufficient to support the claim that DNA visualized in these cells is dinosaurian in origin; only sequence data can testify to its source. However, these data suggest that affinity purification using antibodies may provide a means of recovering and concentrating suffi- cient amounts of DNA to be useful for next generation genomic sequencing. Because only about 15%–20% of cells from the dinosaurs reacted positively, and because reactivity that was observed was minimal relative to extant cells, there may be insufficient DNA present to validate its origin by current sequencing technology.

There’s also a section in the discussion titled “Molecular mechanisms for preservation” where she discusses how the tissue could have been preserved, and she doesn’t use the word “miracle” even once.

Thirdly, (and once again) Schweitzer has completely blown away the biofilm argument….Seriously – STOP TALKING PZ – you are showing folks how little you know about the work that has been done by Schweitzer.

Errm, while I think “completely blown away” is an exaggeration, I actually agree that she’s done some substantial work to demonstrate some degree of preservation of the original proteins. But the question isn’t about how the dinosaurs must have died 4,000 years ago, but how partial preservation was maintained for 70 million years. Please note that Schweizer, the person you are idolizing, is not a creationist and recognizes all of the evidence you deny that supports the age of these fossils.

Fourthly PZ – this is not something small and isolated found in one or two bones here or there – this is EVERYWHERE – soft autogenous tissues are EVERYWHERE in the fossil record – it is THE NORM and we at the Creation Research Society are going to PROVE it. We are going to test fossils from as many sites as possible and we are going to document what you are trying to cover up – the fossil graveyard left all over the earth as a result of the Flood of Noah happened very recently. Just sit back and watch the show.

Yeah, right, everywhere. Way back in 1996 I had a guy telling me he’d found fossilized human testicles all over in mine tailings from Carboniferous rocks. He was as delusional as Armitage.

By the way, I loved you in Ray Comfort’s new film, “Evolution vs God.”

Thank you. I haven’t seen it yet myself, so I have to rely on trustworthy reporters like Mr Armitage for reviews.

I envy you your locker room » « Happy Canadian Thanksgiving!