Perhaps we need to think more about human psychology. There’s an interesting phenomenon that goes on all the time when people read about evolution: they shoehorn the observations into some functional purpose. There’s just something so satisfying to our minds to be able to say “that thing exists for this particular reason”, and we find it frustrating to say, “there is no reason for it, it’s just chance and circumstance”. It shouldn’t be so, but our minds just try to fit everything into that particular mold.

Now watch: some people — maybe even you — are going to now try and develop an adaptive scenario for why having brains that work that way is a good thing. We try to build a teleological framework around everything, and so it must have a purpose that is being fulfilled, and we rarely stop to think about whether it may be actually limiting us. Maybe it’s not good. Maybe there are other ways that brains can work, and this particular mode of thinking is just a clumsy kludge that resulted from the gradual agglomeration of stuff, mostly unselected, that built up the substrate for human cognition.

A case in point: the female orgasm. There’s a new paper out on the subject, and there are lots of articles being written on it, and they generally start out by pointing out that there’s something puzzling about the phenomenon: shouldn’t it have, you know, a reason for existence? It can’t just be, it has to do something useful for women, or reproduction, or pair bonding, or any of dozens of hypotheses that have been proposed.

So NPR finds closure in an explanation.

A pair of scientists have a new hypothesis about why the female orgasm exists: it might have something to do with releasing an egg to be fertilized.

Nope. That’s not what the paper says. It says it might be a relic of a historical endocrine function, not that it plays any role in women today.

Carl Zimmer sets up a mystery.

An eye is for seeing, a nose is for smelling. Many aspects of the human body have obvious purposes.

But some defy easy explanation. For biologists, few phenomena are as mysterious as the female orgasm.

I would challenge his analogy: what’s so obvious about a nose? Nostrils and an olfactory epithelium, sure — that does have a clear functional role, and we can see signs of selection in the signal transduction apparatus, but why do we have this bony projection with a knob of cartilage on the end? We think we’d look weird without it (like Voldemort), but there’s a wide range of shapes within our species, and related species — chimps and gorillas, for instance — don’t have much in the way of a nose. It doesn’t affect their ability to smell.

(Note: both of those links take you to good summaries. I’m just weirdly conscious of how much we all take adaptive thinking for granted.)

This is the point where I tell you all to go read The Case of the Female Orgasm: Bias in the Science of Evolution by Elisabeth Lloyd, in which she takes apart a collection of adaptive scenarios that simply do not hold up. We ought to face facts: orgasm in women has nothing at all to do with reproduction. It doesn’t facilitate transport of semen, it doesn’t make them want to lie down horizontally, it doesn’t compel them to pair bond with men (since masturbation is a more effective path to orgasm than intercourse, why aren’t we arguing that the clitoris is the devil’s tool to drive women away from men? Oh, some do.)

Fortunately, this new paper by Pavlicev and Wagner, The Evolutionary Origin of Female Orgasm, doesn’t succumb to the fallacy of the spurious adaptive explanation. Instead, it’s following a much more useful evolutionary tradition: everything is the way it is because of how it got that way. Every living thing has a line of ancestry, and we inherit with modification the traits of our lineage, and the necessary way to study these traits, since our ancestors aren’t generally available for examination, is to take a comparative approach. So they do the evolutionary biology thing and ask what functions female orgasm have in related species, and try to infer an ancestral role in pre-humans.

Here, we note that most hypotheses are seeking an explanation for the presence of female orgasm within the human or primate lineage, whether due to direct or correlated effects of selection. Yet we will argue below that female orgasm, as male orgasm, predate the primate lineage, and the orgasm of human females likely evolved from an ancestral and adaptive trait, which might not have all the characteristics of human orgasm and may also have had a different function. We propose that explanations focusing on primate mating system and behavior thus address the primate-specific (or sometimes human-specific) modifications of a previously existent trait rather than its origin (Amundson, 2008). Our focus here will be the question what that ancestral trait may have been. As the lineage-specific modifications or secondary cooption (“exaptation,” in terms of Gould and Vrba, 1982) can take extreme forms under different, internal, or external selective forces, we therefore do not expect to find in animals a female orgasm as we know it in human, but are rather seeking its homologue in other species.

They also place it in the context of more general theories about the basis of the female orgasm.

The field addressing the role of female orgasm is by no means short of hypotheses. The evolutionary hypotheses align in two groups: one group argues that it is not quite true that female orgasm has no effect on reproductive success (e.g., enabling female choice, bonding, etc.), and the other group argues that it may indeed have no reproductive value in the females, but rather its existence is explained as a correlated effect of another selected trait, or a different developmental stage. For example, one well appreciated among the later hypotheses describes female orgasm as a fortunate consequence of the shared developmental basis of clitoris and penis, and therefore a consequence of reproductive necessity of the male orgasm (by-product hypothesis, Symons, 1979). A critical review of the existing hypotheses has been published in Lloyd (2005) and will not be attempted here.

So the two general hypotheses are that it has an as-yet-undetermined reproductive function (this is so far unsupported by the evidence), or that it is a byproduct of other properties. Pavlicev and Wagner are, I think, adding some other nuances to the story, but their explanation is actually orthogonal to those two explanations.

Pavlicev and Wagner point out that induced ovulation is common in mammals, and is probably a basal trait of the clade, although it has been repeatedly gained and lost. It’s an energy saving measure; why should the female spontaneously ovulate all the time, in the absence of an opportunity to become pregnant? We take it for granted — nuns continue to menstruate, after all — but many mammals do not ovulate unless they receive an endocrine signal that announces to their ovaries that hey, you’re actually mating, this might be a good time to drop an egg for fertilization. In these species, the clitoris seems to be the trigger — stimulating it induces an endocrine surge that induces ovulation. So the idea is that humans have female orgasms because our distant mammalian ancestors had all this complex hormonal machinery coupling ovulation and coitus, and we’ve lost the necessity, but the apparatus is still there. We’ve dismantled the factory, but the remnants still make a fine playground.

Another interesting pattern they see is that when ovulation is uncoupled from clitoral stimulation, there is a tendency for the clitoris to waner farther from the vaginal opening. Induced ovulators tend to have the clitoris positioned right near or even within the vaginal opening, but in animals like humans, it’s quite far away and is poorly stimulated by vaginal thrusting. This may be another of those byproducts: the opening of the urethra happens to be between the vagina and the clitoris, so the increasing separation of the clitoris and vagina may be a consequence of increasing the separation of the urethra and vagina.

I do have some slight reservations about the paper, though. One is that the explanation is insufficient. Here’s their diagram of the phylogenetic distribution of induced ovulation. 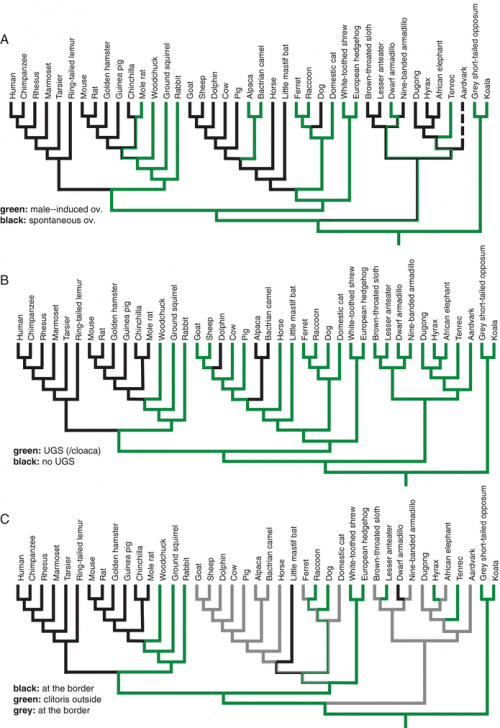 Phylogenetic distribution of (A) modes of ovulation, (B) the presence of the urogenital sinus (UGS; in basal species: cloaca), and (C) the position of clitoris relative to the vaginal orifice (in, border, out). Note the phylogenetic correlation between spontaneous ovulation with the reduction of the urogenital sinus, and the external position of the clitoris. This correlation is suggestive of an ancestral role of clitoral stimulation for the initiation of pregnancy in induced ovulators and the loss of this function in spontaneous ovulators.

Note that our lineage seems to have lost this property at the separation of rodents and primates! One estimate is that this divergence occurred about 96 million years ago, so our ancestors had to have lost the requirement to link clitoral stimulation to reproduction deep in the Cretaceous, yet still maintained the association between clitoral stimulation and orgasm to the modern day.

That retention is still best explained by the byproduct hypothesis — the pleasure circuitry is maintained by ongoing selection for its operation in males, and there’s no purpose to untangling it and removing it from females, and in fact, selecting for anorgasmia in females might have unfortunate reproductive side effects in males.

I’d also suggest that it doesn’t answer another question: why does sex feel good? We have other urges that our physiology doesn’t address by inducing super-charged sensations — I mean, why don’t we have wild orgasms every time we urinate? Why doesn’t my thyroid send ripples of joy through my body when I balance my salt intake? If you’ve ever watched cats mating, you also know that sex for them is more a matter of compulsion than an opportunity to revel in pleasurable sensations by choice. Do salmon enjoy thrashing themselves to death? I might also argue that to some human males sex isn’t a matter so much of feeling good as it is conquest, expressing dominance, and flaunting their social potency to their peers, so there are clearly alternative mechanisms to make sure males mate with females.

I might suggest that the mystery isn’t the female orgasm, but the orgasm, period. But it’s only a mystery if you insist on demanding a direct adaptive explanation for its existence.