When I was growing up, it was quite common for pop-science to illustrate the evolutionary future of humanity: it was all big bulbous heads and spindly limbs and skinny little bodies. It was the kind of thing that probably played a role in shaping the conventional image of what extraterrestrials would look like, since obviously they would be more ‘advanced’ than humans.

It was all nonsense, of course, but that kind of thing is tough to shake off — almost as tough as ‘great chain of being’ fantasies, which seem to resonate with our naturally selfish idea of a biological destiny.

Now these pop-sci delusions have gotten moderately more sophisticated. Meet Project Graham, an awful, but very slickly produced, demo of the future of humanity if we were selected for car-crash survival. 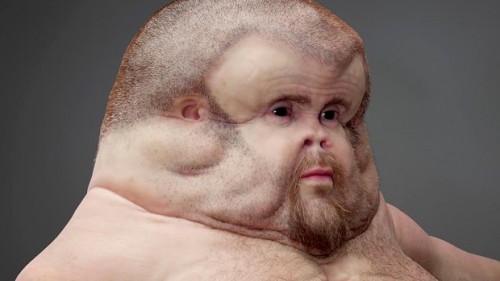 So he’s got this massive double-walled cranium with a small brain suspended by rubbery ligaments inside it, air-bag cushions built into his ribs, a face thickly padded with fat, and knees that can bend side to side. Apparently, we’re going to have a kind of Mad Max future where the human race is going to be intensely culled by a lives of near constant collisions.

I detest this sort of thing. I can sort of see that the point is to educate people about the damage inflicted by car crashes, but it’s doing it badly — I’m not going to be terrified into driving more cautiously by the thought that my many-times-great-grandchildren will be uglified — and it’s doing it by inserting more misconceptions about how evolution works into the general public.

Also, if the selection pressure from driving were that severe, I know what the future of humankind would look like: a population of pedestrians, and people sensible enough to stay out of those death-traps on the road.

Another mass murder, this time in Munich » « Friday Cephalopod: <moan>