I’m working with a student this summer on a project to measure the dynamics of a migrating cell population, and in addition to making pretty pictures and collecting data, we’re going over papers in the scientific literature. One of those papers is about filopodia as sensors.

For those of you who don’t know your cellular anatomy, migrating cells have this kind amoeboid movement in which their cytoplasm oozes in a kind of bulk flow into expanding volumes of membrane, but they also may make long, spindly, delicate ‘antennae’ that reach out in multiple directions. These filamentous processes are called filopodia. Moving cells probe their environment by sending out these little scouts that can sense signals, either repulsive signals that tell the cell to not go that way, or attractive signals that can trigger the cell to flow in a particular direction.

The illustrations in this paper are kind of quirky, but nice. To show how cells respond to signals in the environment, they use an octopus as a stand-in for the cell, with its arms representing filopodia. 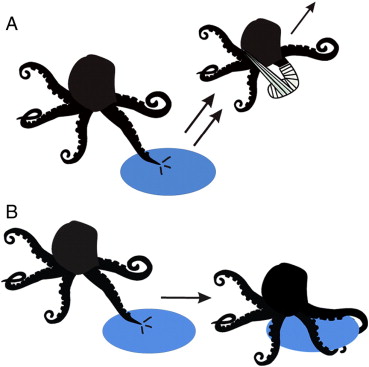 Despite the blatant octopomorphization, something about this appeals to me. I’ve been describing these cells we’re watching as spidery, but clearly I’ve been using the wrong phylum as a metaphor.

I like the bandaged arm image. One of the things we’re sometimes seeing is that cells don’t just retract and limp away, sometimes they literally die and explode into little fragments. This needs an octopoid illustration.

We shall all dance now » « Really…not alien, not alien at all