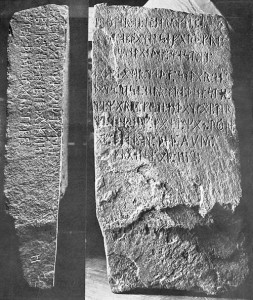 Eight Götalanders and 22 Northmen on (this?) acquisition journey from Vinland far to the west. We had a camp by two (shelters?) one day’s journey north from this stone. We were fishing one day. After we came home, found 10 men red from blood and dead. Ave Maria save from evil.

(side of stone) There are 10 men by the inland sea to look after our ships fourteen days journey from this peninsula (or island). Year 1362

This is the Kensington rune stone. It’s a broken 200 pound block of stone, with Norse runes carved on it, that was dug up by a Swedish immigrant farmer in 1898. Kensington is just a short drive north of where I live, and the stone is currently on display in Alexandria. I’m unimpressed, but there are a fair number of people in this area of Scandinavian descent who really, really want to believe that Minnesota was settled by Vikings in the 14th century.

It’s a very silly ‘artifact’, clearly cobbled up by immigrants at a time when there was a lot of Scandinavian pride movements (I grew up in a family of Scandinavian descent, and I can tell you…yes, there is quite a bit of cultural pride, not undeserved, but sometimes getting a bit carried away). But the true believers can get a bit obsessive.

Scott Wolters is a true believer. He claims to be a forensic geologist, but his credentials in geology are practically non-existent (he used to claim he had a Master’s degree. He doesn’t). He was host of a very bad pseudo-archaeology show, America Unearthed, on the History Channel. His crap has been debunked many times, but that’s no obstacle to being at the Paradigm Symposium. I saw him here a few years ago, where the highlight of his presentation was noting that two points on a globe could be connected by a straignt line.

He’s back with an over-long lecture titled The Kensington Runestone, the Templars, and the “Royal Arch”. He’s going to draw more unjustifiable connections. He proudly announced that he’d just been awarded his title as a 32nd Degree Mason that morning, so he’s going to show how the runestone, Masonry, and the Templars are all connected…and furthermore, that the Kensington Runestone was the beginning of the foundation of the United States of America. Yep, he’s going to go all National Treasure on us.

First, he’s going to prove to us that the runestone is genuinely old. He did give a respectable explanation for how he dated the rock at over 200 years old, describing the weathering of mica. The rock contains bits of mica, which is soft and wears away more quickly than the surrounding matrix, so he showed that the exposed face has relatively little mica; he then compared that to the surfaces of similar rocks, tombstones in New England cemeteries, and found that it took about 200 years for those stones to show similar levels of erosion. I have two immediate objections, though: Minnesota winters are much more severe than New England winters, so he may not be looking at comparable degrees of weathering, and further, he isn’t dating the inscription, but only the time since the rock was split, exposing a flat face. He was very enthusiastic and claimed that he had proven the age of the Kensington Runestone, but he had done no such thing. He had pranced about and shown some scanning electron micrographs, so that’s sciencey enough for this crowd.

Then it gets weird.

He plunged into a scratch by dimple by scrape mark in the inscription. Every single one was significant — the carver never made a single mistake, and the surface of the stone was free of all blemishes. It was a secret code, hidden in plain sight, that only he, Scott Wolters, could read. He pulled out the letters that had holes and read deep meaning in them.

But he’s not done with his scrying! First he has to explain Catholic church history, and the sacred feminine architecture of their cathedrals. The nave represents the womb; pointed arches are female genitalia; those twin towers so common in gothic cathedrals represent women’s knees drawn up in the birthing position. And look: Notre Dame means “Our lady”. Doesn’t this sound like the entirely non-patriarchal Catholic church we all know and love?

Now focus on this: on the Kensington Runestone, there is a hooked X. Let’s read a heck of a lot into that. 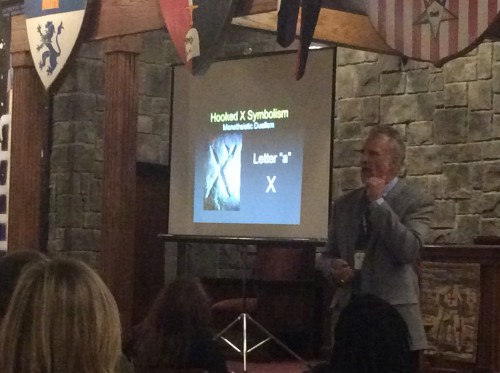 If you cut an “X” in half horizontally, the top half is a “V”, a chalice, standing for femininity. The bottom half, the “^”, is clearly a penis, or masculine symbol. What could the hook be? Obviously, it’s a child. This one letter is representing the holy trinity, which consists of god (masculine), Jesus (child), and the Holy Ghost, which must be…a woman, Mary Magdalene!

If you are so shocked that need to change your underwear, go ahead, take your time, the text will sit here waiting for you.

Are you back? You should have waited, you might need to change your pants again after the next revelation. Wolters flashed a picture of the hooked X, and…an Egyptian sarcophagus, with the pharoah holding the symbols of his office, the crook and flail. I swear, I heard several women orgasming in the front row at this startling news that crossing your arms over your chest produces an X shape.

There was much more, but at this point it descended into pure numerology and nonsense. Remember those letters with odd defects in them, mentioned above? The letters were “G”, “R”, “A”, and “L” — the Holy Grail! All the numbers in the inscription are indirect references to other phenomena: the 10 dead men are the 10 commandments, for instance. Why would they bother to talk about “fishing”? Because they were fishers of men. Who was the “we” who were fishing? Jesus and Mary. He then plays games with other numbers on the rock to announce that he has figured out the coordinates of the Templar’s vast secret treasure, relative to the location of the runestone, and it is a spot in the Rocky Mountains, guarded by a tribe of Indians.

Further revelations: Meriwether Lewis was a Mason, and so was Thomas Jefferson. Jefferson sent off the Lewis and Clark expedition, not just to explore the West, but to check on the safety of the Templar’s treasure. Lewis parted from Clark (who was not a Mason) temporarily for a mission of his own, right near the secret location of the treasure.

Further evidence, and a Wolters hallmark: the Newport Tower in Rhode Island was built by the Vikings (no, it wasn’t), and if you draw a line from the center of the tower through the keystone arch, it points directly at the Kensington Runestone. That’s rather useless information to any navigator, since they’re about 1500 miles apart, but hey, Wolters loves to draw lines between points on maps. He also spent some time scribbling lines between points on the runestone, but my eyes had glazed over so much at that point that all I could see were donuts.

Finally, he babbled for a bit about the Jesus ossuary (remember that? The Lost Tomb of Jesus? You’re forgiven, it’s forgettable hokum). There’s an asterisk-shaped symbol scrawled on top of it, and with judicious use of colored pens on a photoshopped image, he claims it is actually an X with a T overlaid on it. Why we care, I don’t know. I was well past caring about much of anything after being smothered in bullshit for an hour and a half.

Yes, an hour and a half. One of the problems with this conference is that the speakers would just drone on and on about their endless obsessions, and the organizers wouldn’t stop them. This was Important Information! Secret Knowledge! You couldn’t interrupt just because of something as trivial as the schedule, or because the speaker was so happily riding the clown train to silly town.

But that was it for me. I decided I’d had enough and went to spend a pleasant evening with my dearly beloved and eminently sensible wife, went out for Korean food, and took a blissful break from all the bullshit. I think I’ve had enough of a dose of bad archaeology, bad science, and bad linguistics to tide me over for a decade or two.