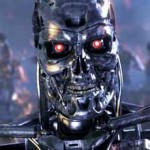 So chrome! So shiny! Soap dispensers work for him 100% of the time!

On the one hand, this is disgraceful — it tells us that biases in the tech sector lead to blind spots. On the other hand, when SkyNet takes over and decides to exterminate the population, it’s only going to shoot the white people.

The shipping costs would be murder » « Cats vs. Zombies