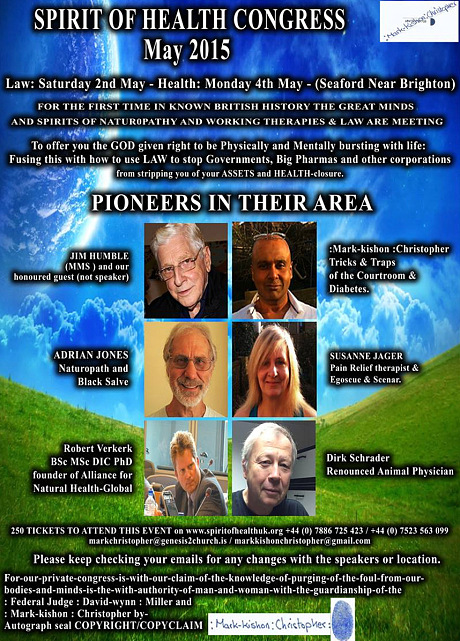 It was a conference that made promises and required £89 to attend, and it was full of desperate, sick people.

The speaker appeared to impress the audience with numerous “cures” for cancer, including one that he claimed had an “80 per cent cure rate”. He then revealed that his friend had been miraculously cured from lung, lymph node and bone cancer with a salt used by sheep farmers.

“That’s what I need!” an elderly lady called out from the audience, her frail voice filled with excitement. “I have a lung cancer that has metastasised quite badly.”

Adrian Jones, the speaker, an Australian naturopath who has no medical qualifications, gave her a reassuring reply: “Maybe you should talk to me some time.”

Among the quack cures they were promoting was something called The Black Salve.

The ointment, also known as drawing salve, contains sanguinarine – derived from bloodroot – and is often mixed with zinc chloride, a corrosive chemical. The paste is used on a topical area to destroy skin tissue, leaving behind a black scar which later falls off.

Video footage of the event obtained by The Telegraph shows Mr Jones telling the audience: “The immune system appears to combine with the salve to kill the cancer.”

The video also shows Mr Jones saying that the salve offered a “100 per cent guaranteed cure for any sort of skin cancer” and that a liquid version, Amazon Tonic III, provides a “70 or 80 per cent cure rate for internal cancers”.

When a man, who was recovering from throat cancer after successful radiotherapy treatment, asked if he would have been helped by treatment with black salve, Mr Jones replied: “Absolutely, absolutely.” He suggested that gargling the corrosive substance would have been the best option.

I suggest that Mr Jones gargle daily with the nasty stuff, as a preventative. To prevent him from misleading the public further.

By the way, here are the hazards of zinc chloride.

Potential Acute Health Effects: Very hazardous in case of skin contact (irritant), of eye contact (irritant), of ingestion, of inhalation. Hazardous in case of skin contact (corrosive, permeator), of eye contact (corrosive). The amount of tissue damage depends on length of contact. Eye contact can result in corneal damage or blindness. Skin contact can produce inflammation and blistering. Inhalation of dust will produce irritation to gastro-intestinal or respiratory tract, characterized by burning, sneezing and coughing. Severe overexposure can produce lung damage, choking, unconsciousness or death. Inflammation of the eye is characterized by redness, watering, and itching. Skin inflammation is characterized by itching, scaling, reddening, or, occasionally, blistering.

Right. Drink that. Apply it to your face.

Mr Jones also claimed that 92 per cent of cases of breast cancer are linked to root canal work.

These people know they are breaking the law and endangering desperate people. The advertisements for the meeting did not say where it was; they had people go to a nearby town, where they were given train tickets to take them to the semi-secret event. And then there is this:

When contacted by The Daily Telegraph, Mr Jones said: “Any and all my comments were presented with the stated and carefully worded disclaimer, in summary, that I presented such comments as a journalist, who is merely presenting what practitioners and/or lay people have said about certain matters.”
“I did not, and do not, make ‘claims’ about a topical paste that may or may not have ‘certain rates of success at treating cancers’, as you allege, and would consider such assertions as defamatory.”

Speaking with the carefully worded disclaimer that I am merely presenting the facts as reported and describing the opinion of qualified people on certain matters, Mr Jones, and all of the speakers at that “conference”, are the evil sludge of humanity, con artists exploiting people’s pain to make a buck, and doing far more harm than good. Arrest and criminal charges would be a kinder treatment than they deserve. The quotes above are taken from a video recording of the event, and he rather clearly did make those claims.