Once again, the timer has run out on the ongoing discussion of American racism, so here’s a fresh thread for you all. I thought you might appreciate the magnitude of the Black Problem: black people get gunned down by the police. The police are far less trigger-happy when it’s a mob of hundreds of heavily armed white people shooting each other. 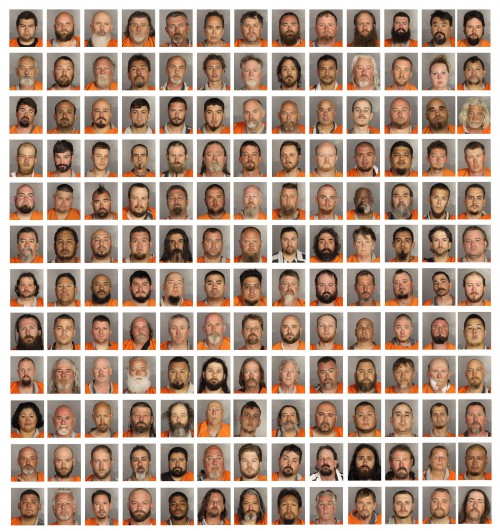 epa04757409 A composite image of handout booking images made available on 19 May 2015 by the McLennan County Sheriff’s Department showing scores of men and women arrested and charged with crimes stemming from a large shootout and fight between biker gangs outside the Twin Peaks bar and restaurant at the Central Texas Marketplace in Waco, Texas, USA, 17 May 2015. Reports indicate that nine bikers were shot and killed and 18 other wounded. Police have announced that 192 people face charges of engaging in organized crime.

I think this suggests an easy solution to the problem of police brutality. Instead of 40 acres and a mule, give every black person in the country a black leather jacket and a shotgun.

Don’t worry, though. The Waco incident was completely thug-free.

Sleep is for the weak » « If this is Mittwoch, must be Flugzeit